I’ve been hanging my hats on my coat rack and on push-pins in my cork board for far too long. My hats deserve better and will be nomadic no more. At last, Everything In Its Right Place. All I need now is motivation to make the trip to The Home Depot 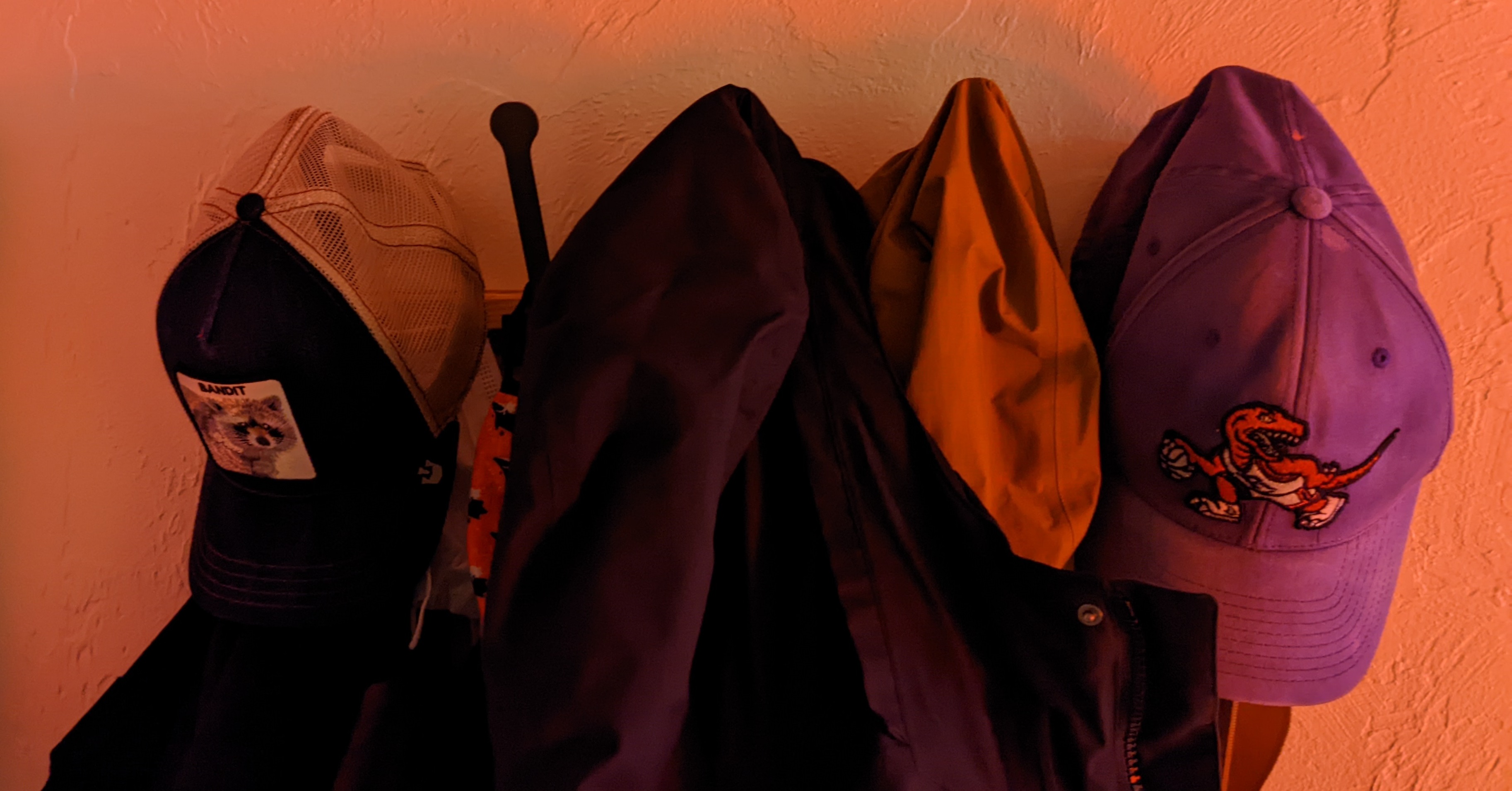 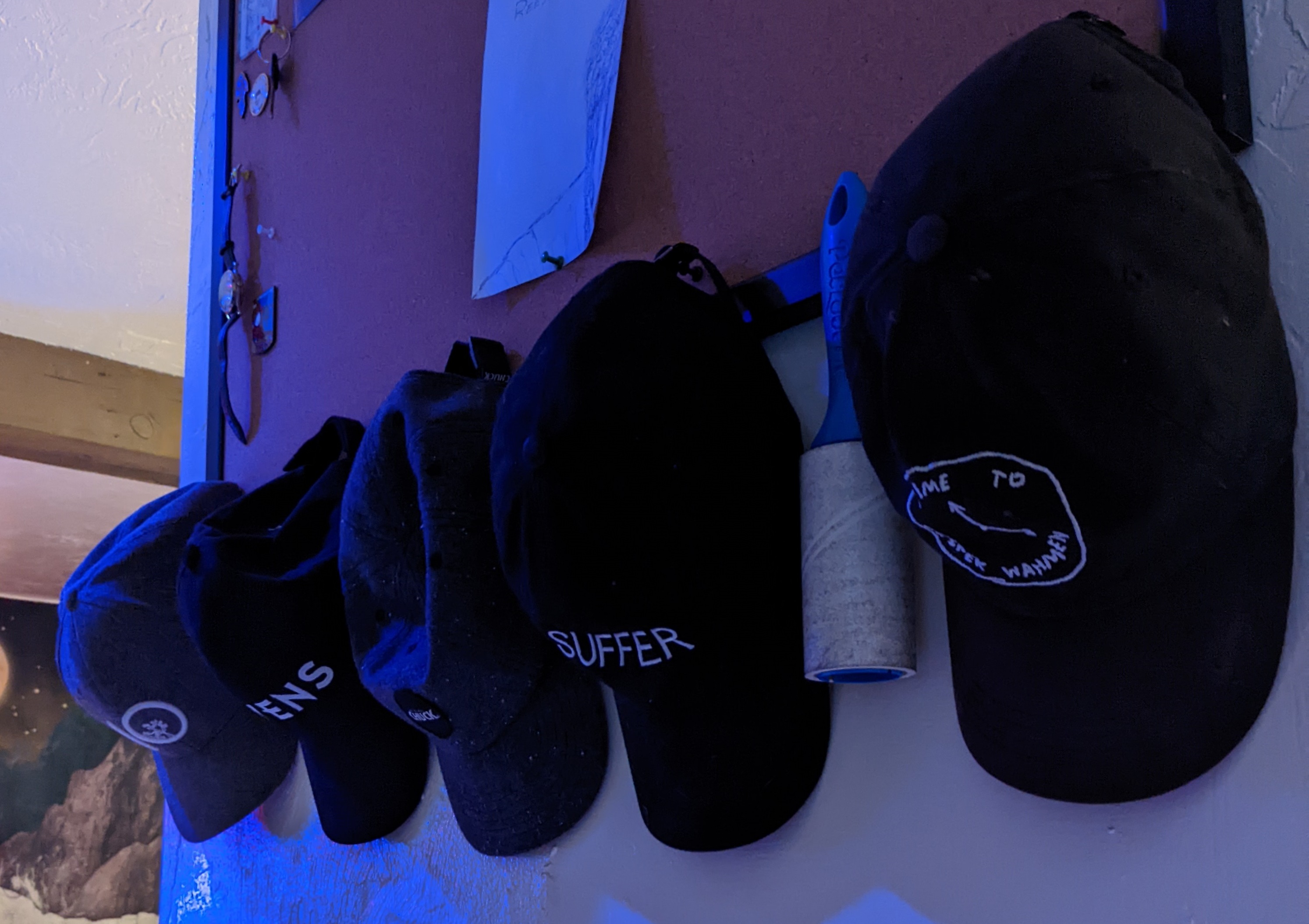 You can see how this isn’t the greatest. Push pins are small so I’d knock my hats off them frequently and taking off a hat to get to my coat underneath also was not ideal. Not to mention only 7 of my 8 hats are pictured here, the missing one could be anywhere!

I already had most of the tools needed: a drill, sand paper, tape measure, and some screws. I needed to buy some round dowel and a board to put the “hooks” on. I ended up getting 72 inches of 1" x 3" Hemlock board and 48 inches of 7/8" round dowel, for cheap

My anti-arbre arsenal is still in its infancy, I added a saw to it that day. That board and dowel need to be cut down to size

I didn’t necessarily plan on buying a hand saw, but after using the self-cutting station for an embarrassing amount of time, I had to abandon. I had other places to be that night and didn’t want to bother an employee for help since I would be well over the cut limit - not due to masculine fragility

I took measurements for how far away each hook should be from the next, both horizontally and vertically, 8" and 14" respectfully

I’d need a little extra space to mount the hook so I decided on 10" lengths. The dowels were cut to 2" and their centres will be affixed to the board equidistant from the top, bottom, and closest side.

Originally, I planned on using a 1.5" tall board, but realised in the store that a larger one would look better. I was also thinking about having these boards be joined vertically. I didn’t go with that since I don’t know how I’d connect them and still make it all flat with the tools in my kit, it would use more material, and I don’t mind them being separate.

I started with marking and cutting the Hemlock board into 10" pieces. My apartment isn’t really the greatest workshop… It was all done jankily by hand (saw) atop my counter. You’ll see just how clean and accurate my cuts are soon

The last thing to cut were the dowels. These were even harder since, hear me out, round things like to roll! Although not perfect, the quality is good enough for me! After all, I’m not one of those pretentious Michael’s with an “angelo” at the end of their name 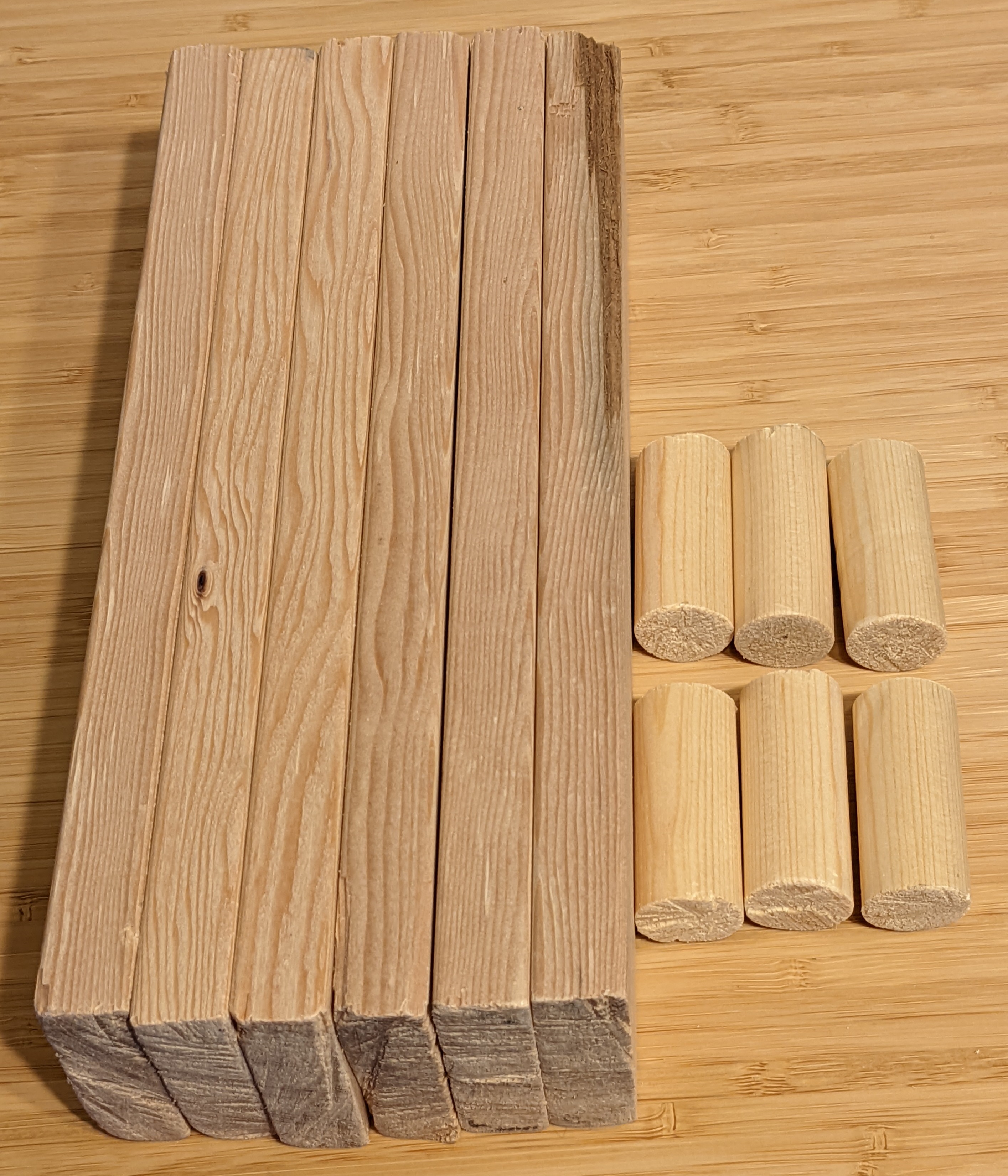 Note: After cutting the sixth dowel for some reason I thought I was done… I need at least two times more than this

Now to drill holes to mount the hooks to the board, and the board to the wall. Four holes through each board and a single one in the centre of each of the dowels roughly half an inch deep. I drove a screw through the back of the board into the dowel to secure them. Then I just screwed straight into the walls, no pilot hole or drywall anchors this time, just a man and his drill

I even went fancy for the exposed screws and attempted a poor-man’s countersunk screw by using a larger bit to enlarge the opening. 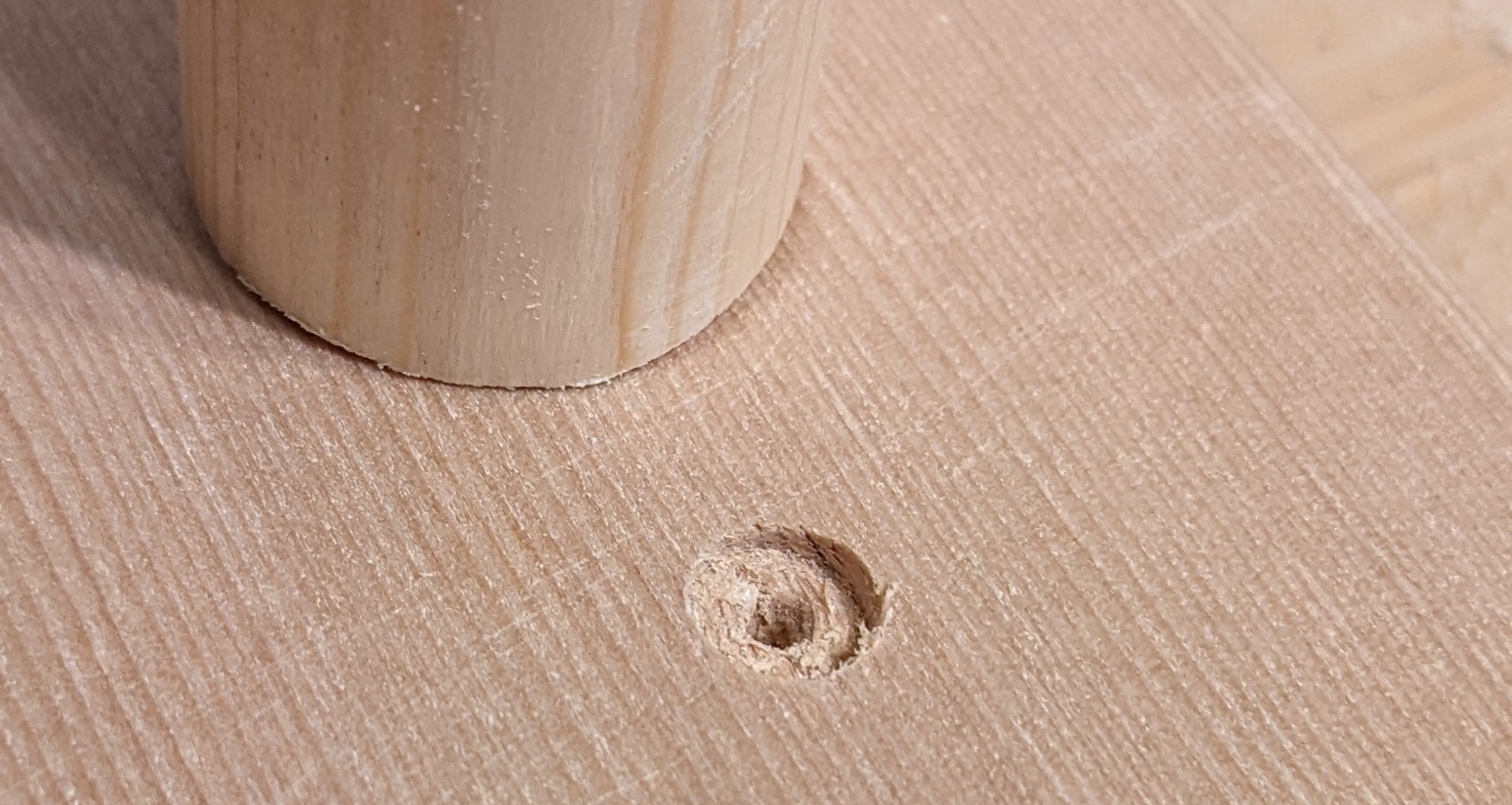 Note: My drill bit kept getting stuck in the boards after the chuck loosened its grip…

I tried to even out my botched cuts as much as possible through aggressive sanding.

I decided which side of each board segment and dowel was to be the back and marked them, so I wouldn’t forget. I picked the better looking side of the boards to be the front and the most level end of the dowel to be against the board. 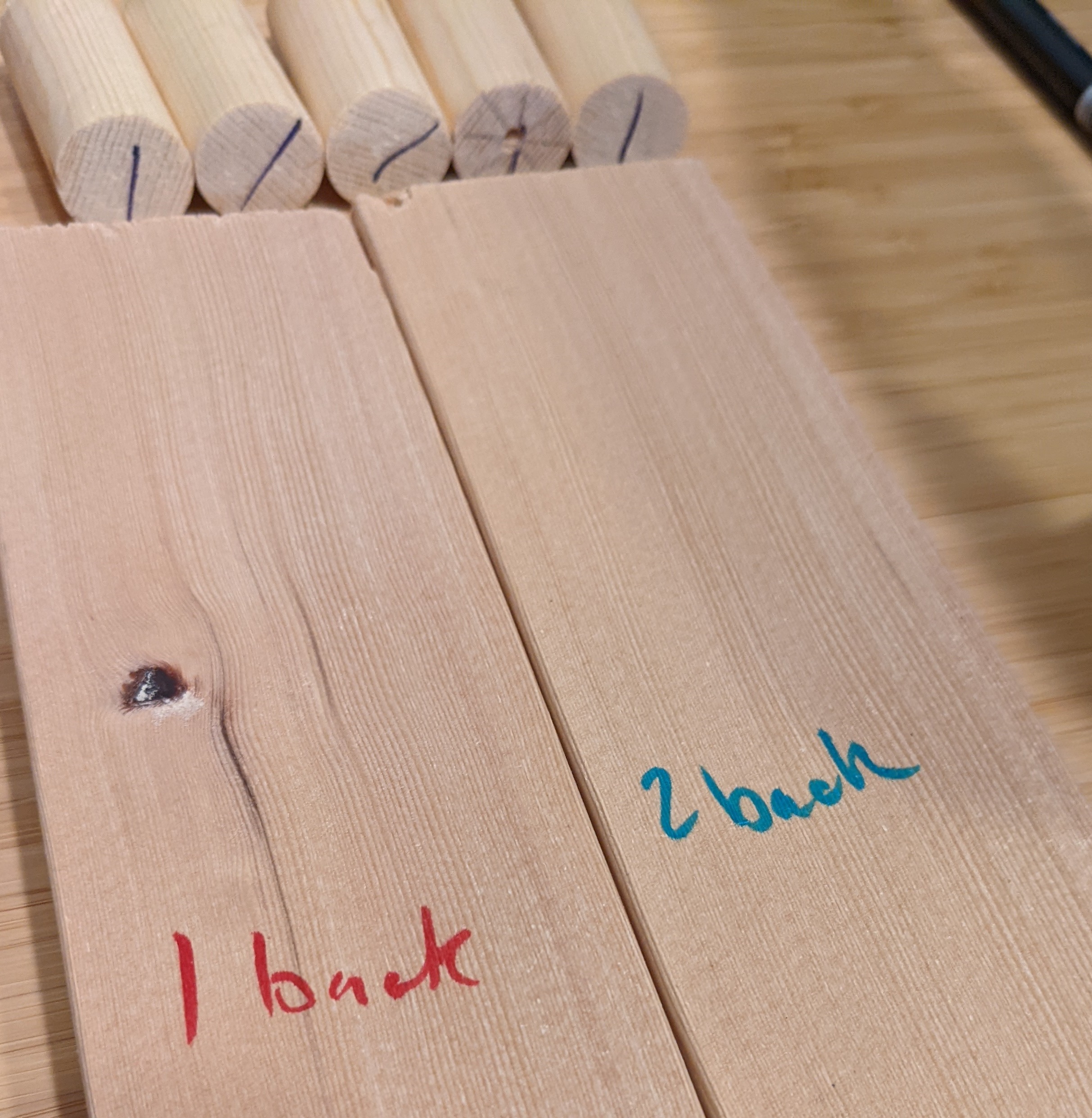 To hide the fact that the boards were not all exactly the same length, I split them into groups of shorter and longer, labelled them, each group was mounted together.

I had what I thought was a pretty funny tweet with this image. It must have been good since my sister @heathermaxwelll recommended I delete it, right…

Here’s three of the first ones I completely assembled. 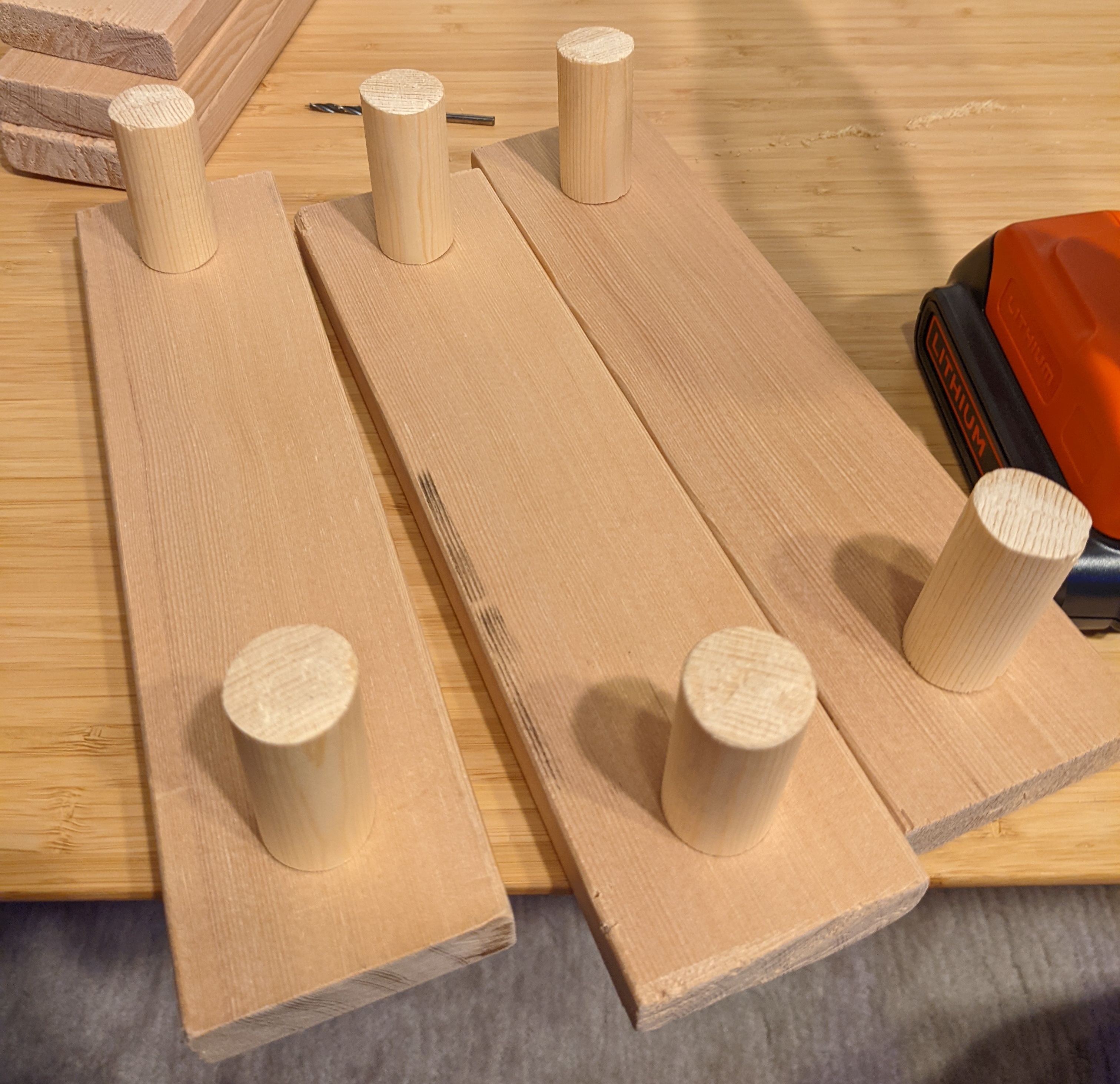 I mounted them all near the entrance to my apartment. In the end I only used 5 of the 6 I made and am actually using one of them to hold my skateboard since I had extra spots. Let me know if you want the spare one

Now would you look at that! Pretty fire

Straight up on a cap, no stack 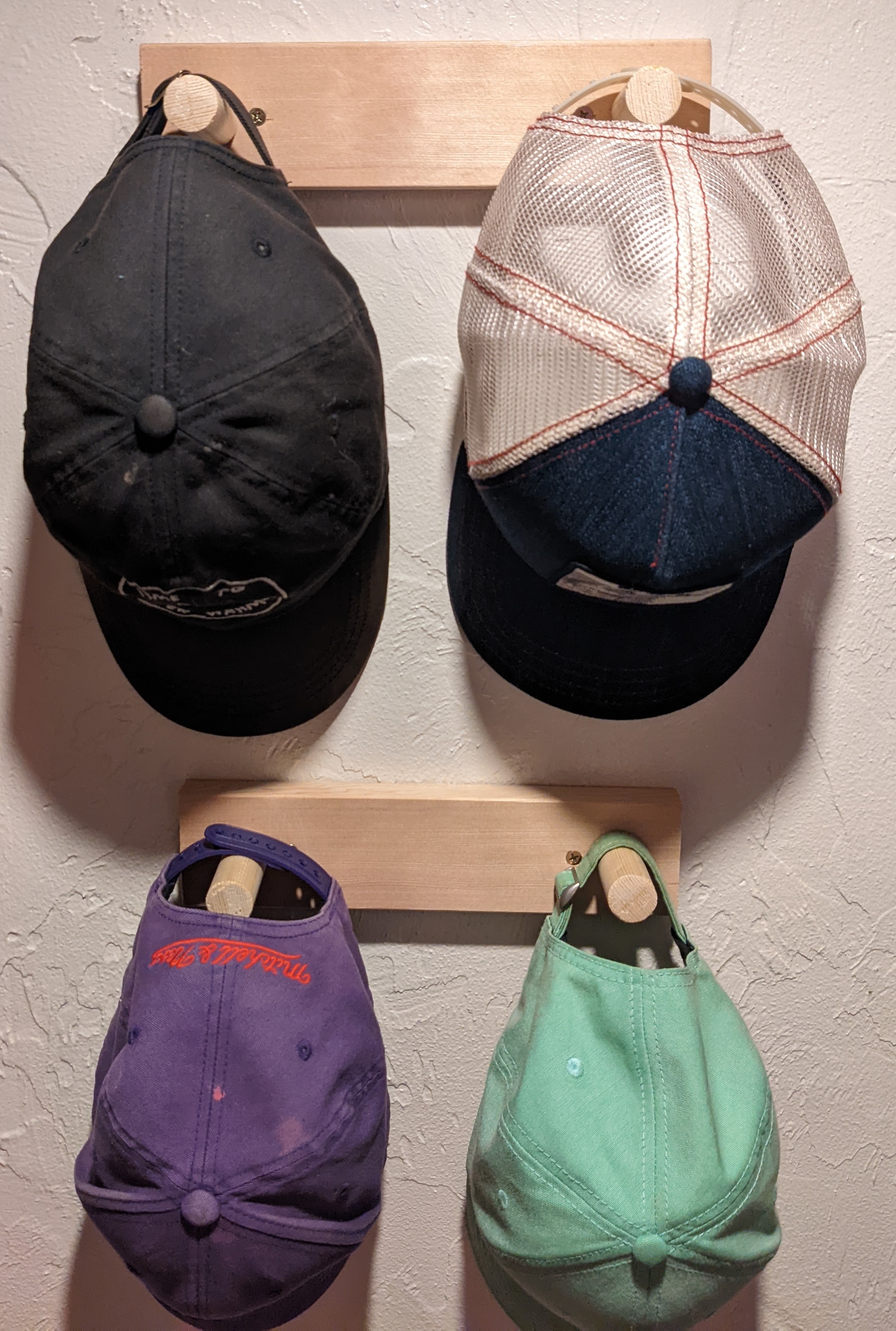