Smash Bros. Melee is one of the few video games I’ll play. You need an adapter to play on PC and I removed mine’s case when I moved to Seattle to “reduce baggage”. Did I really save much space in doing so? Not at all, but I did create a fun little project for my future self

I will be calling the circuit board with controller ports the I/O Board and the other, the Logic Board for clarity.

Minimal volume configuration I came up with; tucking the ribbon cables between two ports.

I followed a guide on blippi.gg (awesome site for PC Melee players) to overclock it from 125 Hz to 1000 Hz. Apparently the best performance requires the Nintendo official Super Smash Bros. GameCube Adapter for Wii U, but what the heck that costs $100!

I’ll be making the design as compact as possible in spirit of the original destructive motive. I also tried to use multiples of my nozzle size 0.4mm whenever possible in the design process. 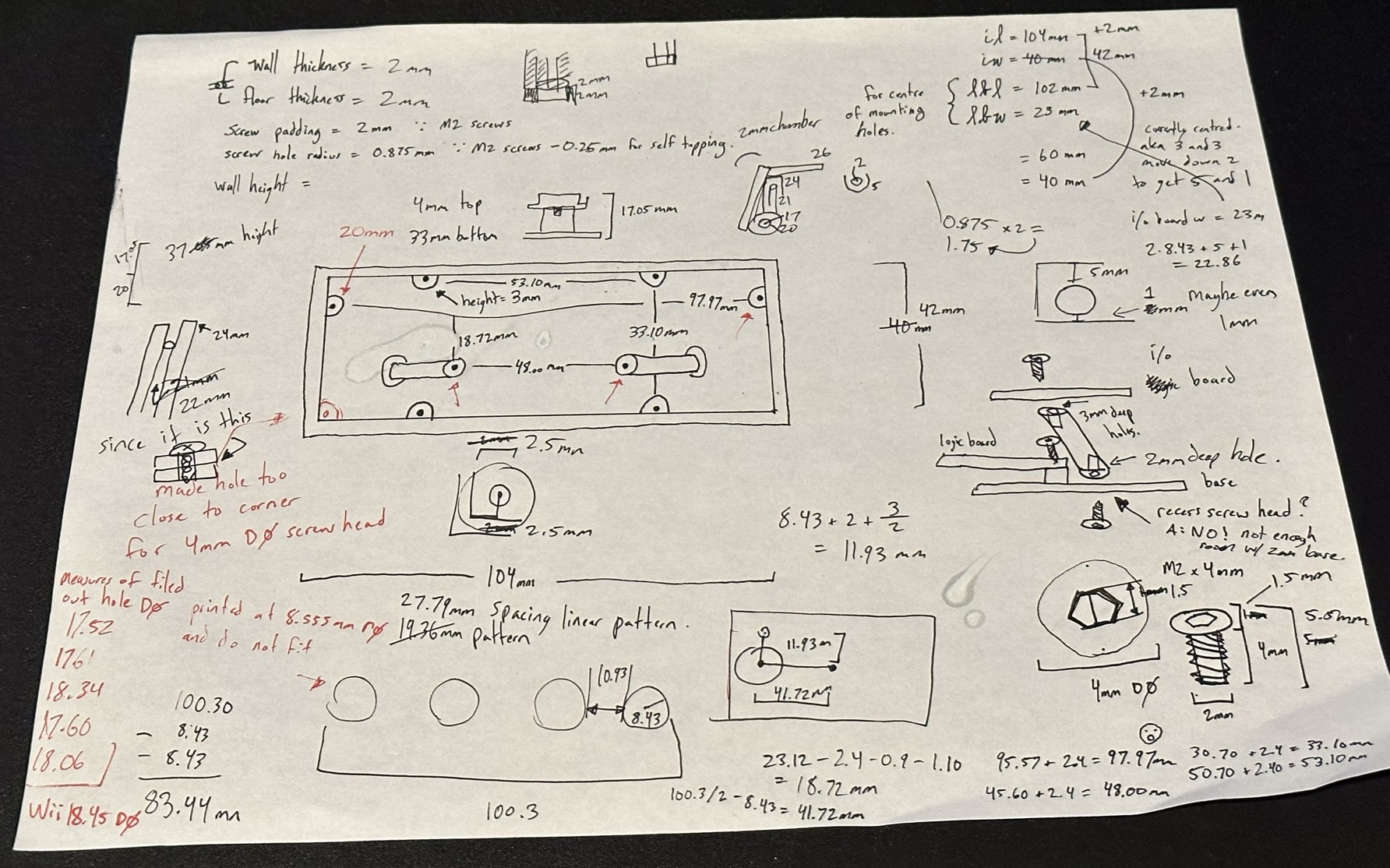 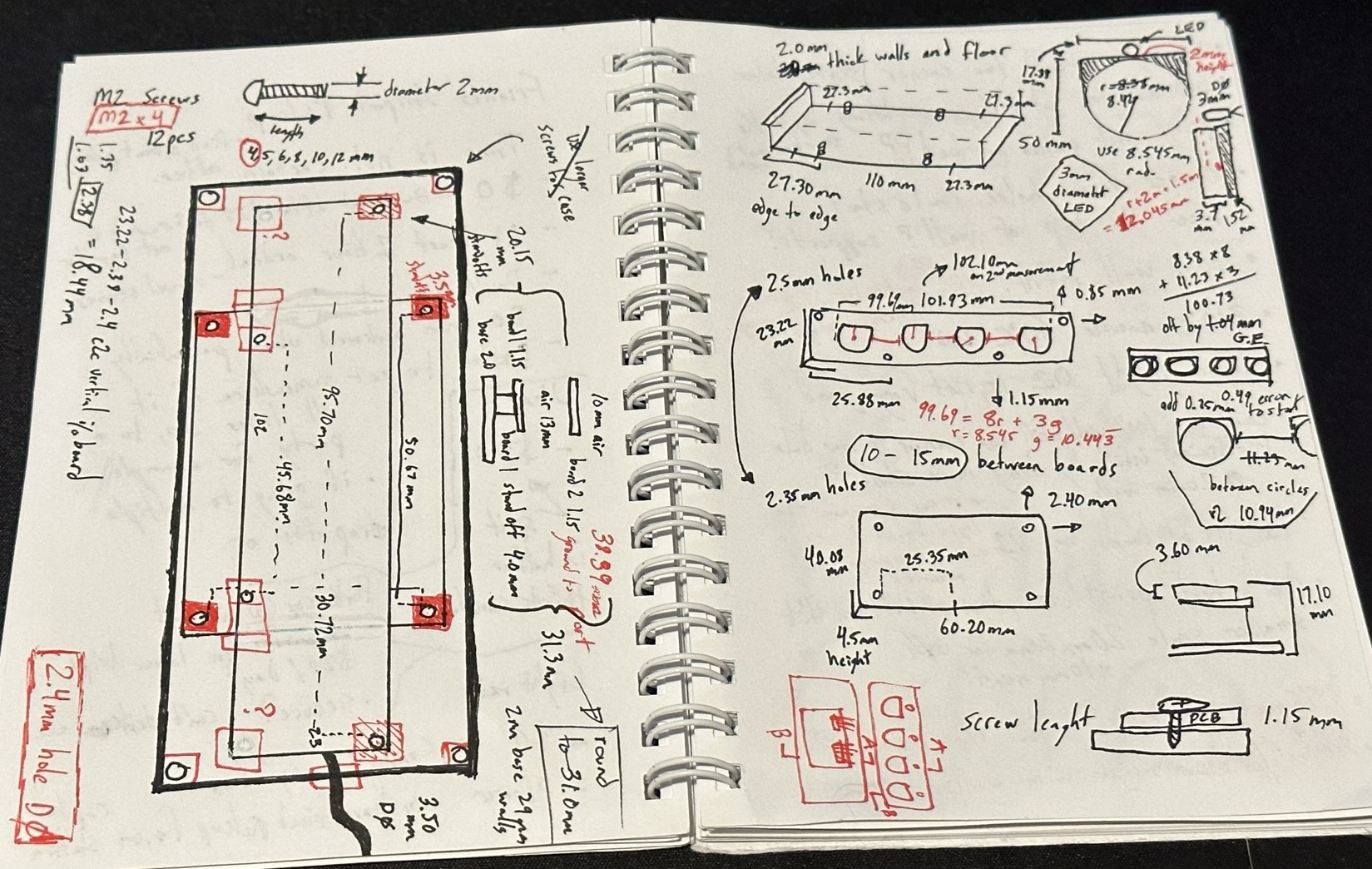 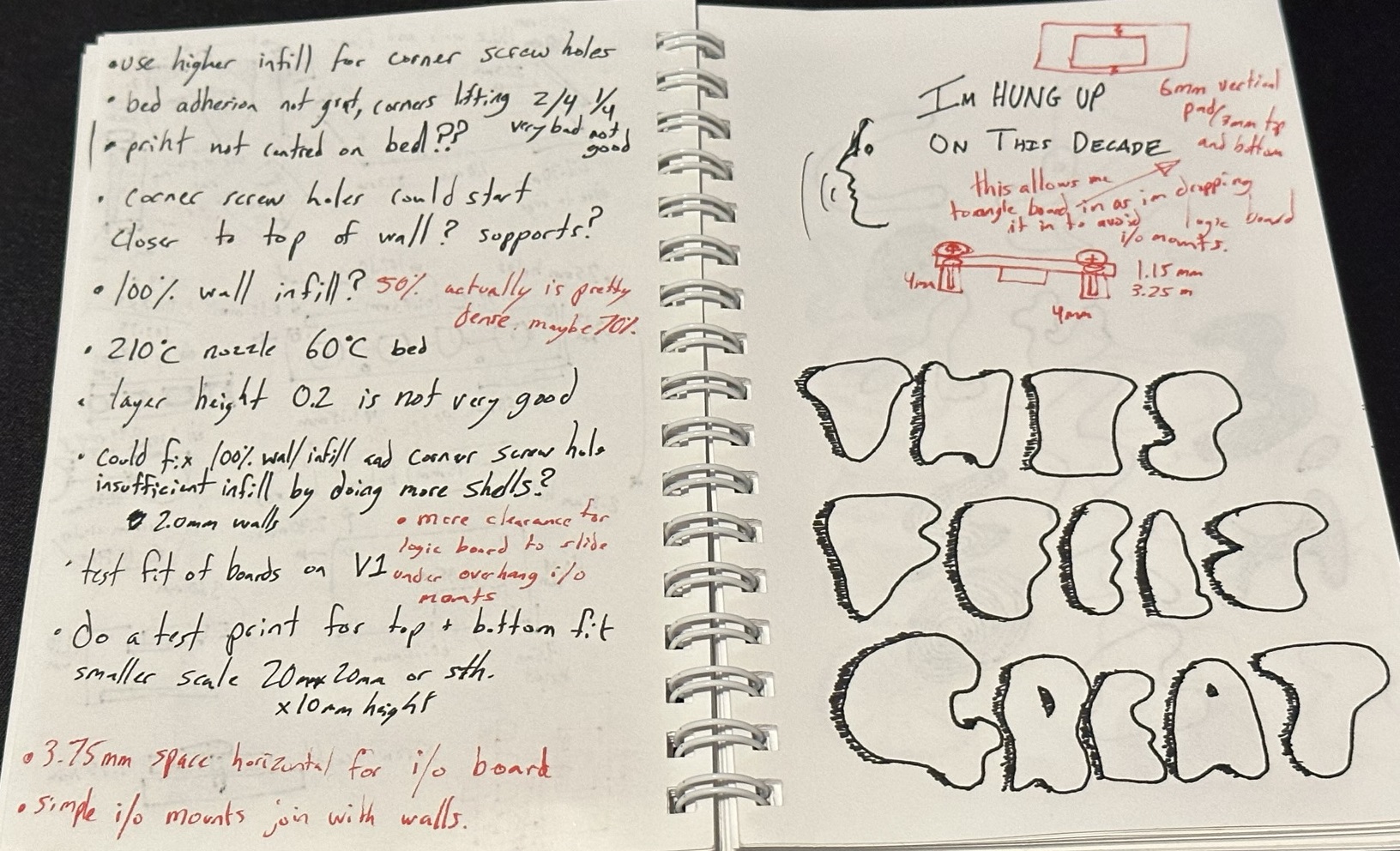 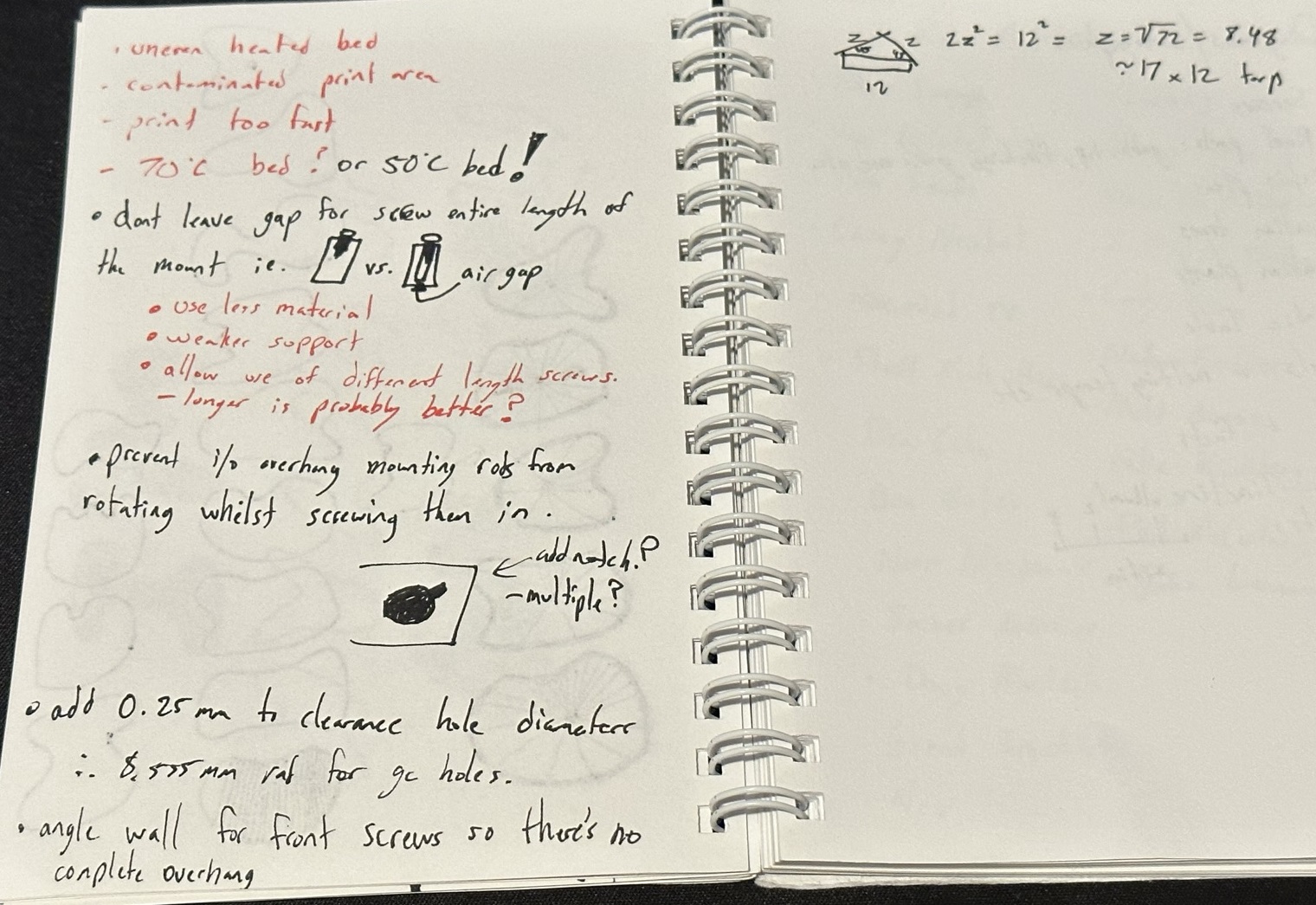 There is not much variation in the z-axis, that is to say, the parts of this model are generally just shapes stretched straight up vertically. As such, most of the effort is in creating the two parts’ sketches. The rationale for making the top so thin was to not overly recess the screws, a deeper than necessary hole would look weird and make them harder to access. The entire case is symmetrical (minus the cable hole)… Could I have used and abused some tool in Shapr3D to make it easier? 3D Printed Enclosure Design has some really good tips that I incorporated. I took inspiration from this box and lid with 4 screw holes and Universal Project Box for how to affix the top and bottom pieces of the enclosure.

The STL files can be found here.

The wires to the Logic Board were getting quite damaged. There were two USB cables connected to the Logic Board one grey, used to power the rumble, and one black, together in a rugged overmolded cable. I never use rumble so removed the grey USB plug cable. I desoldered all connections using desoldering wick and resoldered the ones from the black USB plug cable all to perfection and here’s the proof

Also, I don’t believe my solder has a rosin core! Another thing I can shift blame to! 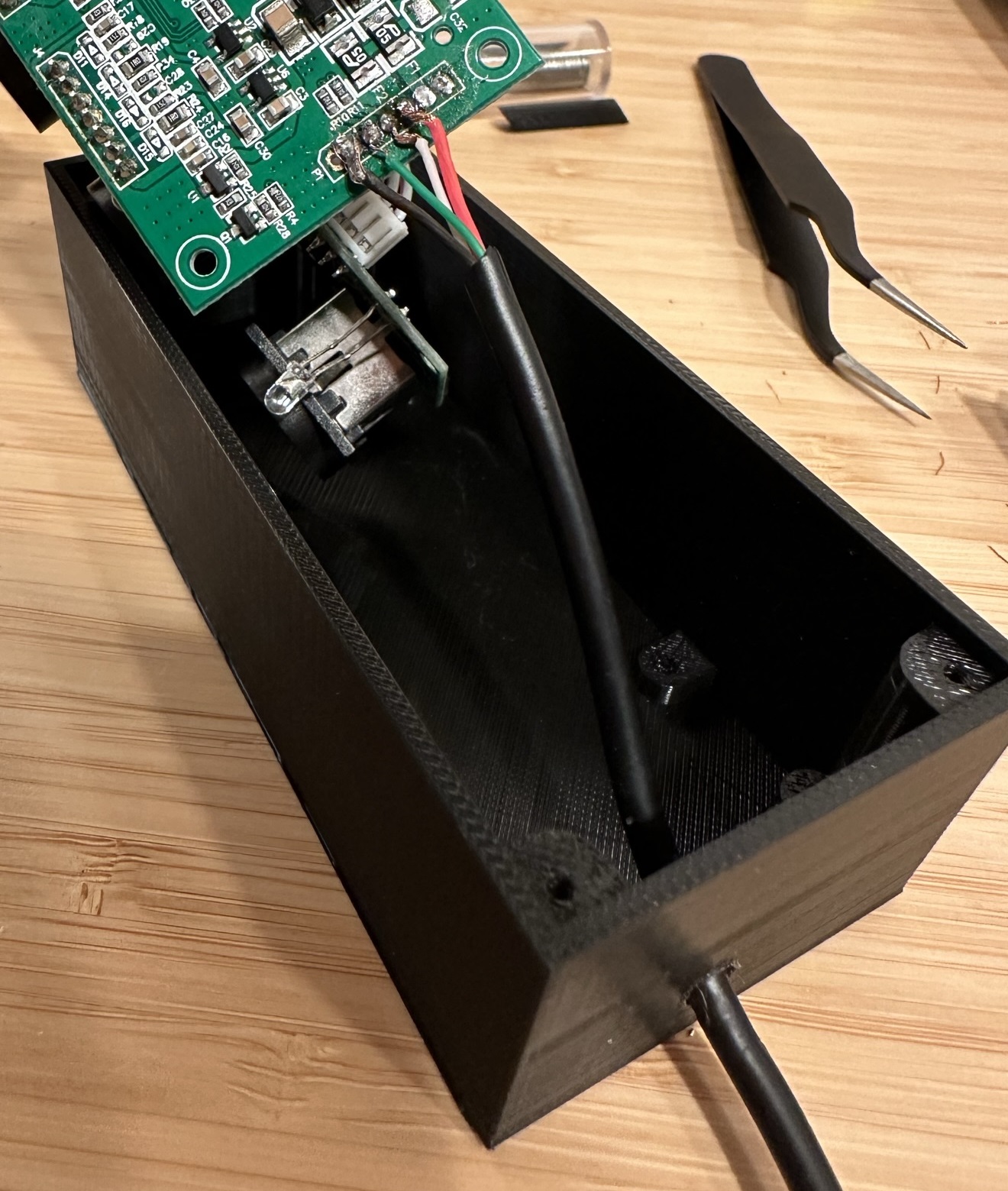 The pinout is taken from this photo.

I plugged in the adapter, and much to my delight heard the Windows device connected sound, fetched my controller, plugged it in. While opening Slippi I saw the red LED illuminate and I knew it was a success. Now, the lead fumes are doing a number on me as I don’t have great ventilation. How did we, as a society, decide putting this stuff in paint was a good idea… That didn’t stop me from booting into an unranked game (over WiFi, I’m sorry) to teach the Falco named kodiak kdk#605 a quick 2-0 lesson :devil: However, this satisfaction was short lived. I remembered I had to drill the hole for the cable in the case. That’s not the issue though, I already knew I had to that. The problem was how was I going to get the cable into the hole! On one end it was soldered to a circuit board and the other end has a USB-a plug. Both are much larger than I’d like to make the hole…

Anyway, I drill the hole with a wobbly wood drill bit I own

that is close to the same diameter as the USB cable. Then I go in for round 2 of soldering, which also worked! Either my soldering isn’t too bad or I’m that chump who would’ve bought the winning lottery ticket this week and but didn’t.

Cutting the cable hole in the middle of the top and bottom parts connection would have been a good option to allow more easily swapping out the circuit boards. An example of this concept can be seen at 1:27 in this cool 3D printed mouse case video.

I found this revealing electronics.stackexchange post about cable strain relief.

Solder the Logic Board to a USB Type-B Port mounted to the inside of the case. This would also help in reducing the amount of strain (which hasn’t really ameliorated with the creation of this enclosure) applied to my, assuredly weak, solder joints. I could use some thermal adhesive, but in the event of having to replace the cable it would be a larger PITA. This also lets the user choose what cable to use and customise the length or sheathing. I think this is the best option and I wonder why the manufacturer of this device didn’t do so, probably the additional monetary cost.

Similar to the port idea, except the port is a retractable cable spool. I’ve always thought these would be cool to use on electronics, but rarely see them in use, perhaps for good reason

It would need to be large enough for the USB Type-A plug. It would give it an old-school custom water cooling PC vibe.

A tighter of a seal type thing like a grommet. I don’t see much benefit using these other than aesthetics or water tightness applications.

Instead of labouring over Shapr3D, you could also just use one of these sites to aid in the design process. Just add: cable hole, controller port & LED holes, and I/O Board mounts.

I partially printed an early design of the bottom to check the fit and alignment. I learned there was not enough space to slide the Logic Board under the overhanging supports. Ultimately, I didn’t end up using these overhang screw mounts for a myriad of reasons. 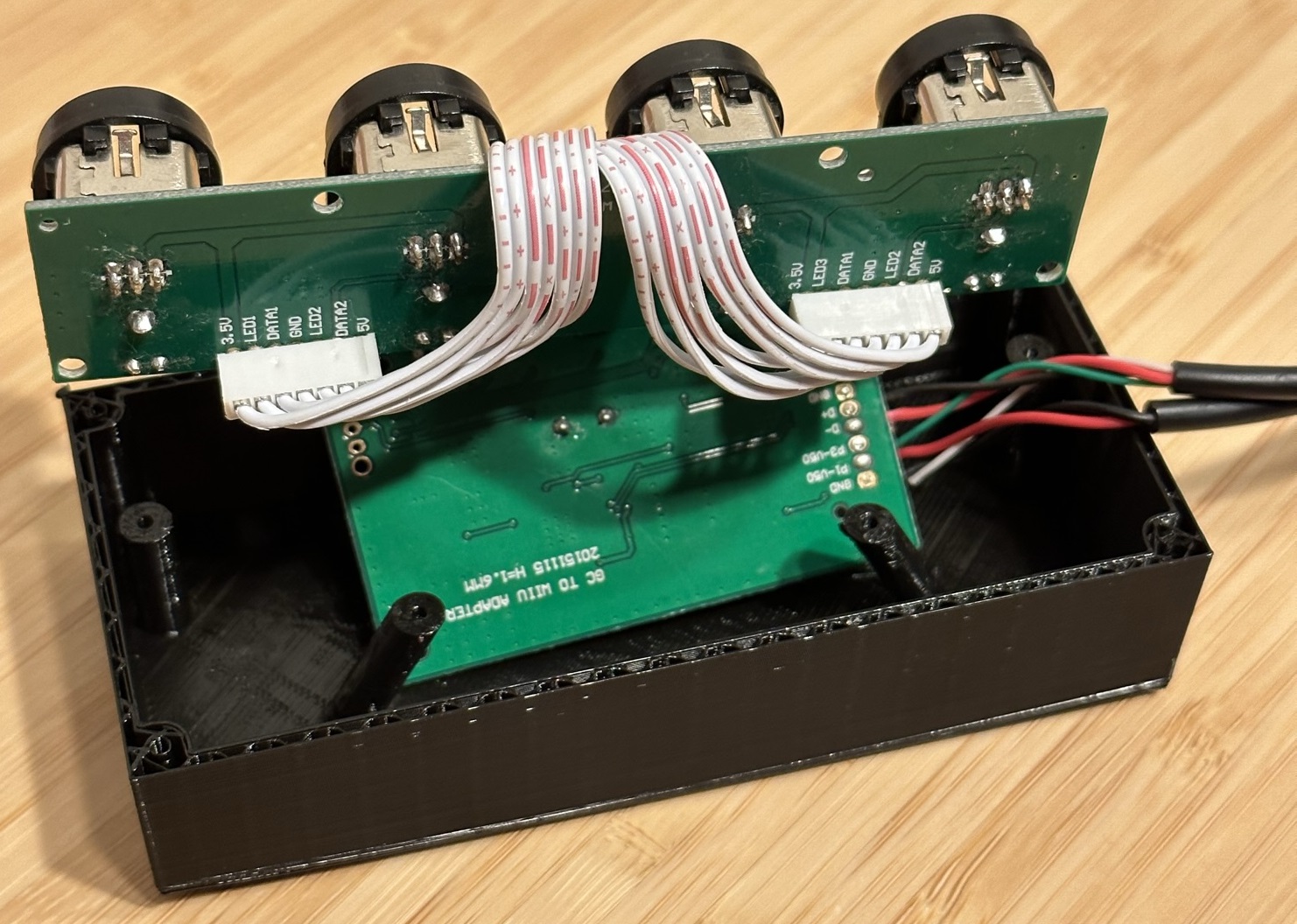 After snapping off the angled mounts I verified the alignment with some pushpins, in place of the undelivered screws. 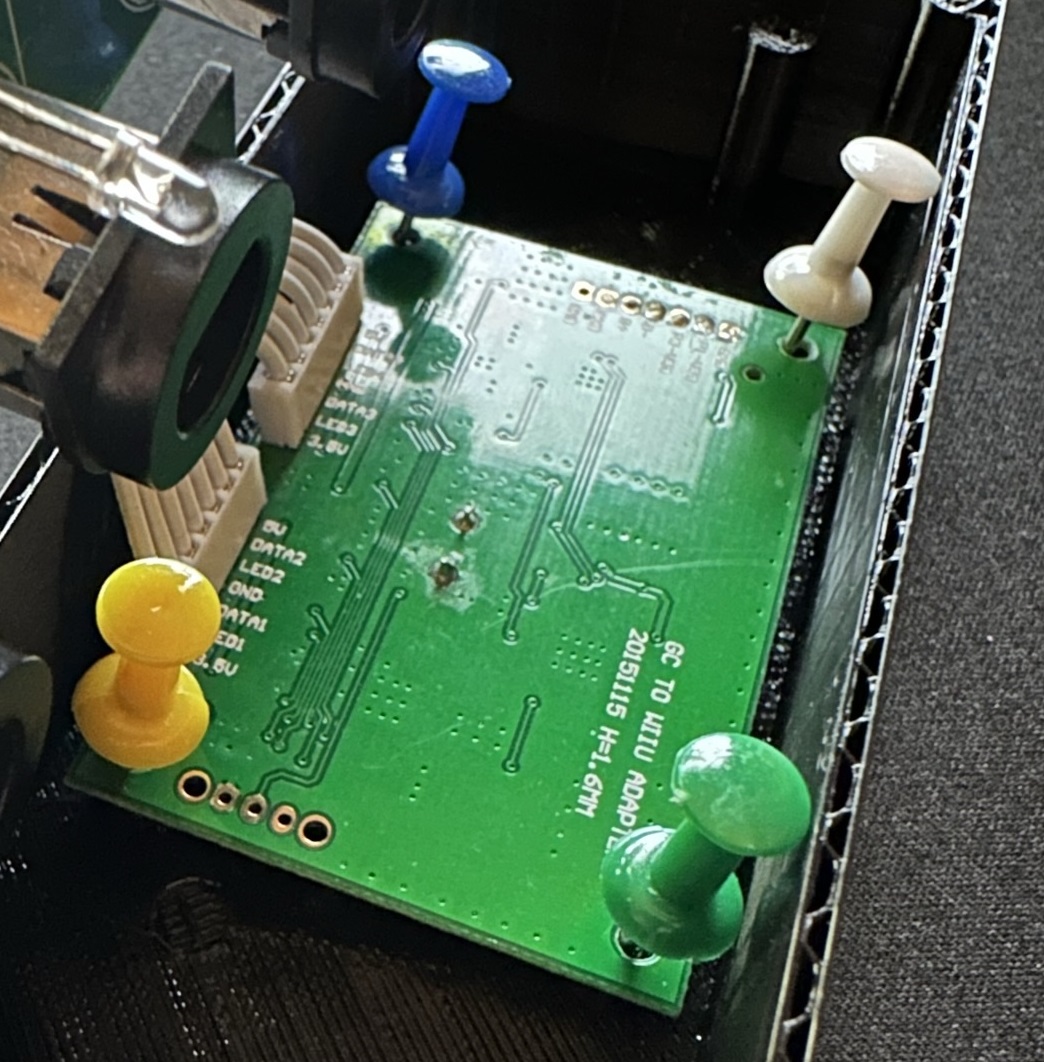 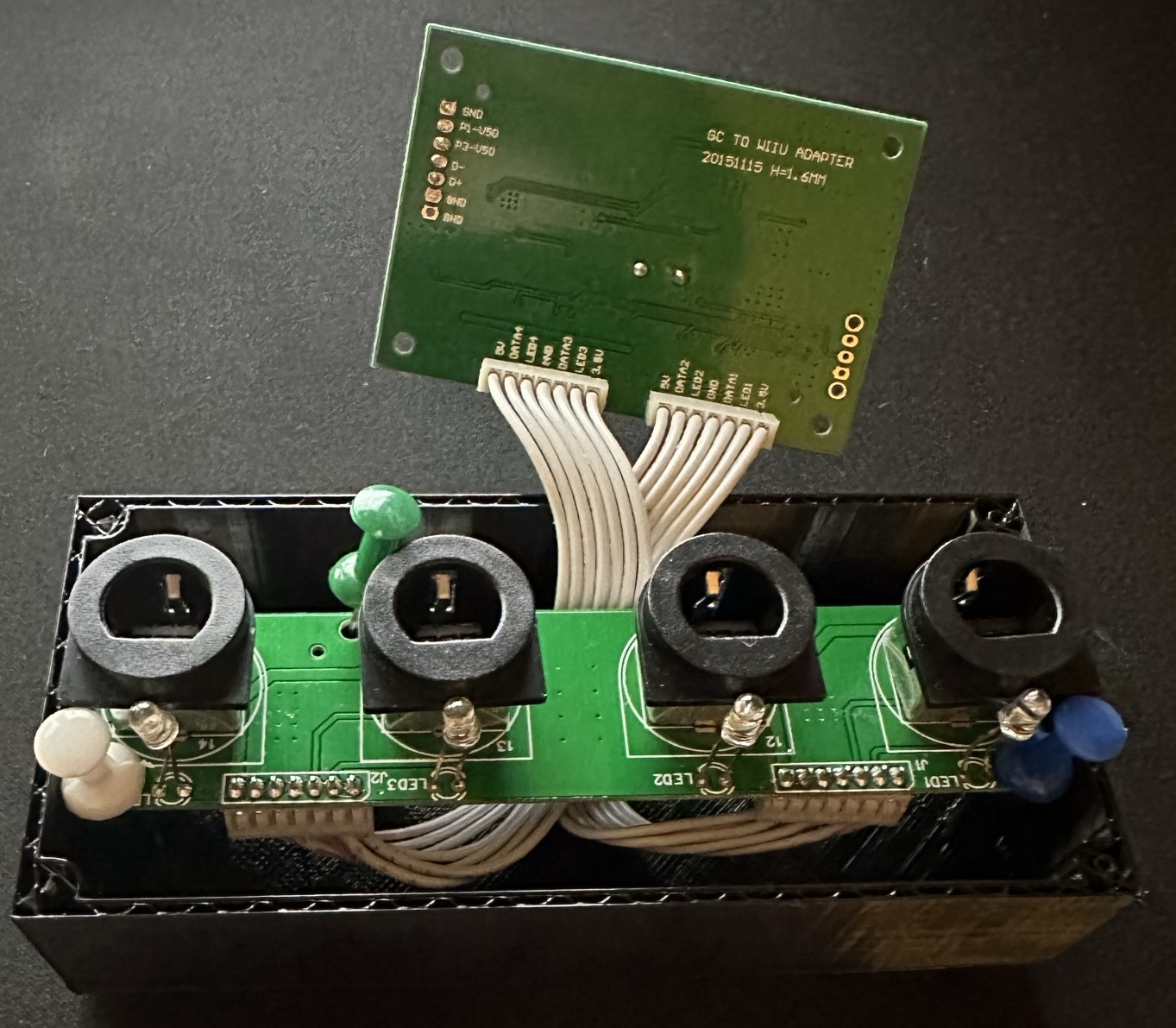 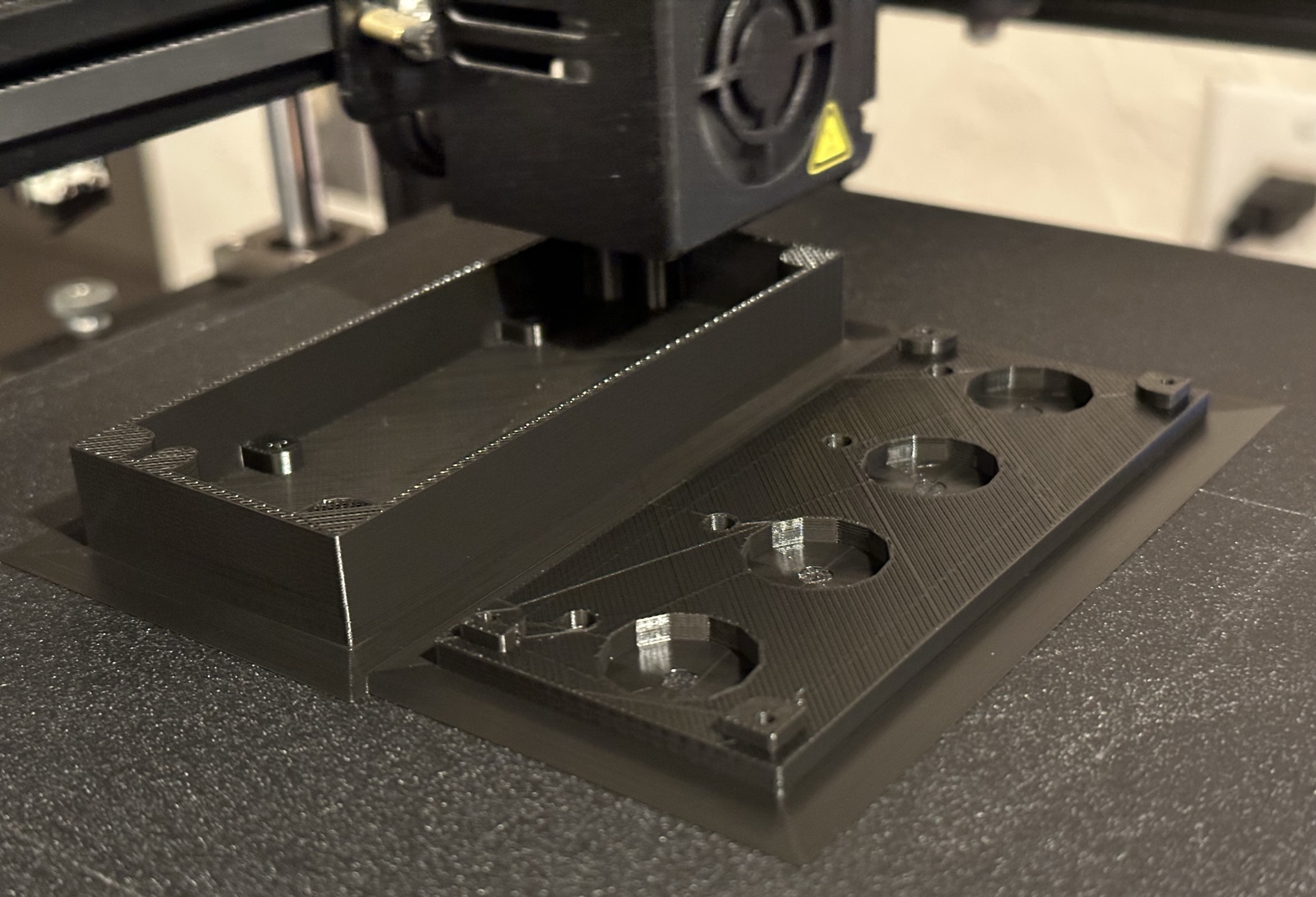 The most professional-looking photo taken of this project 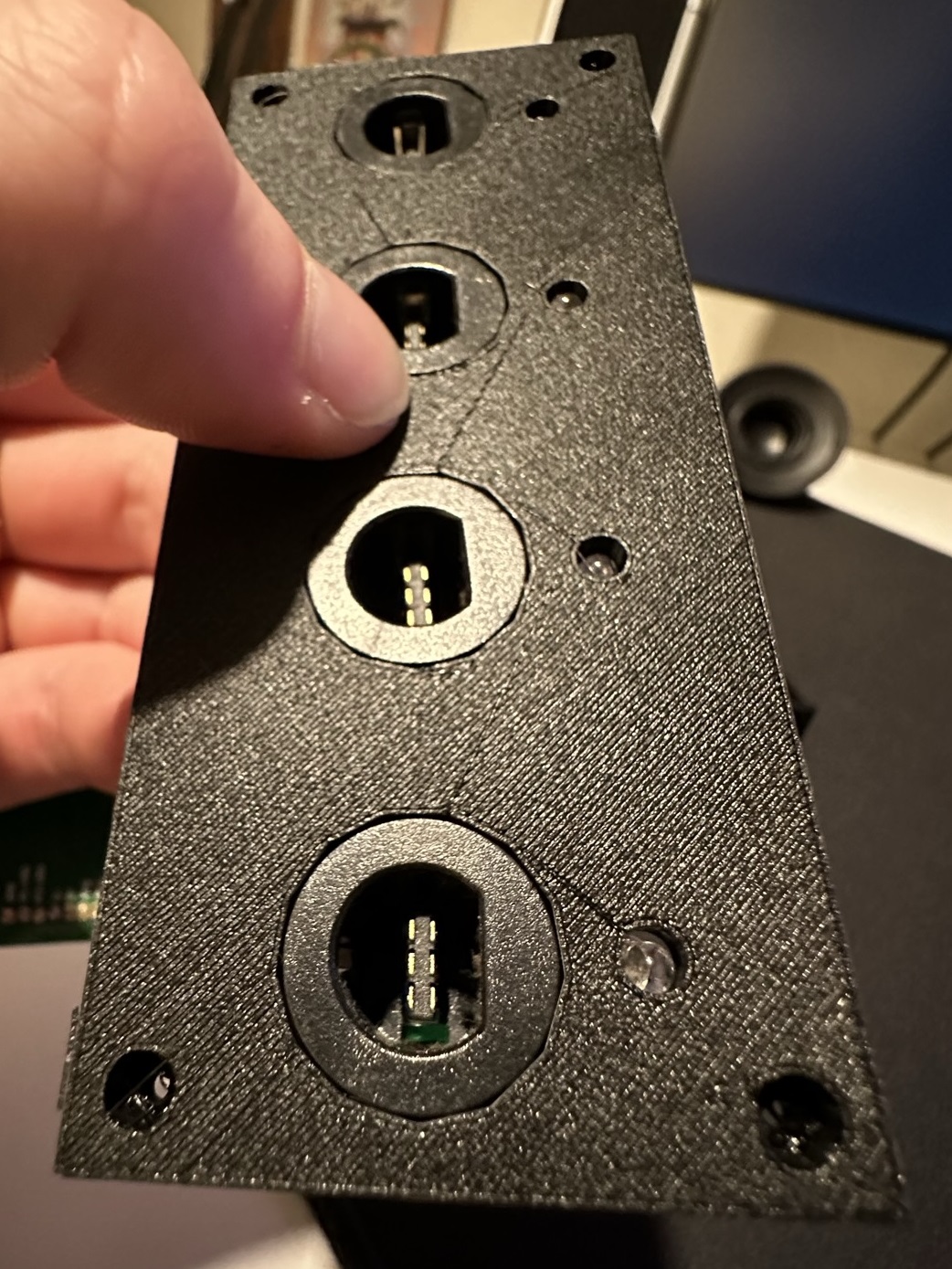 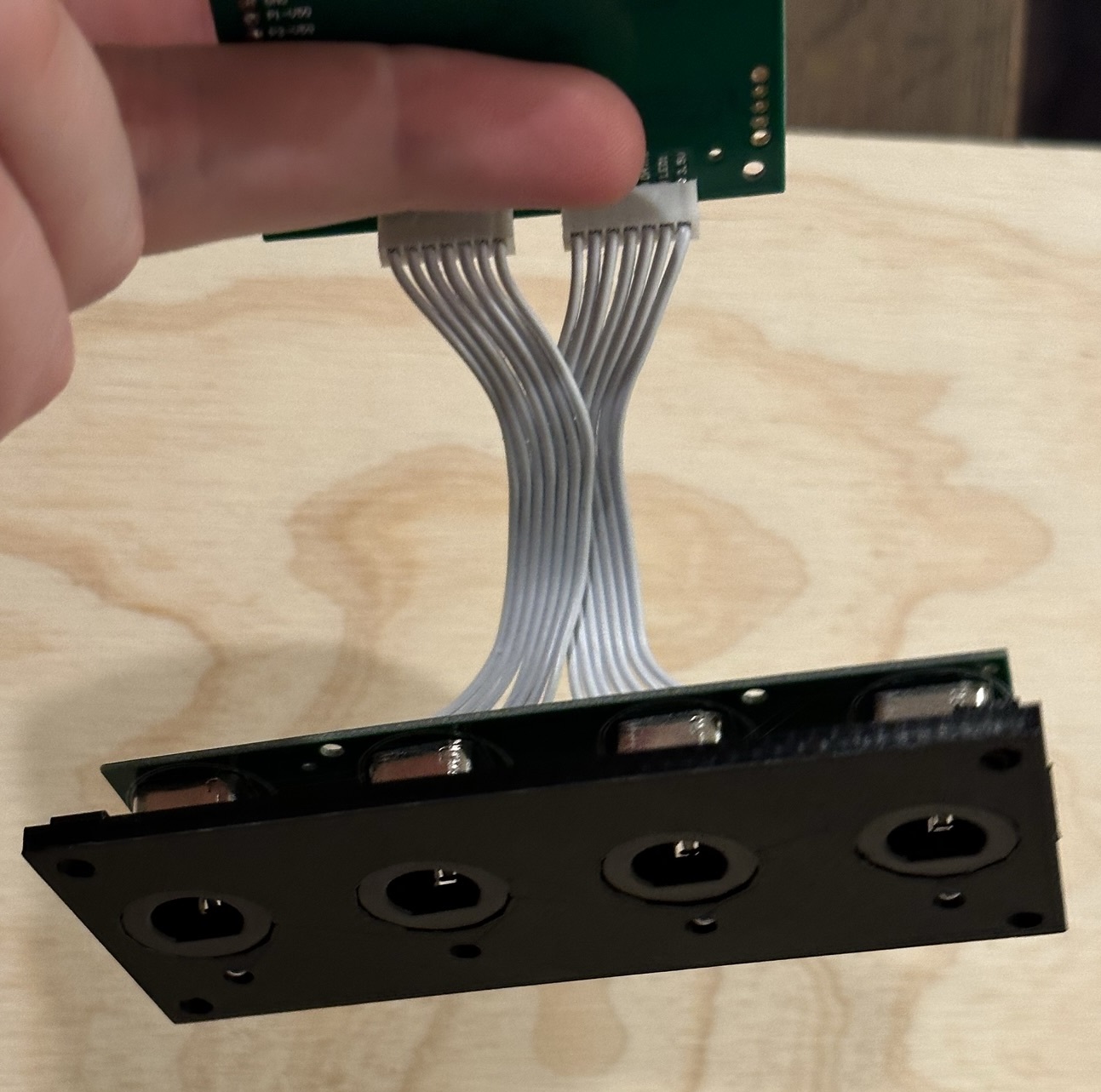 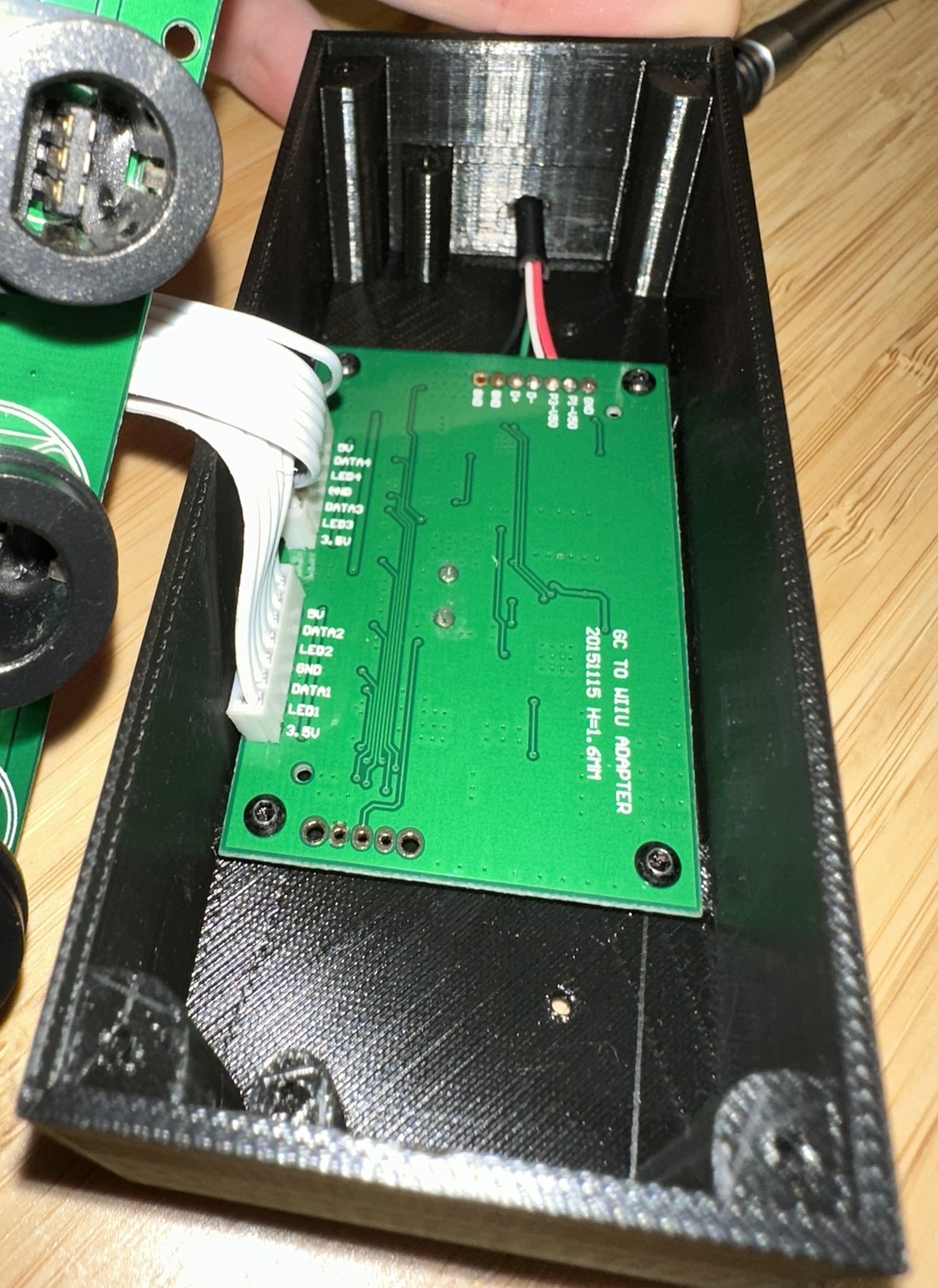 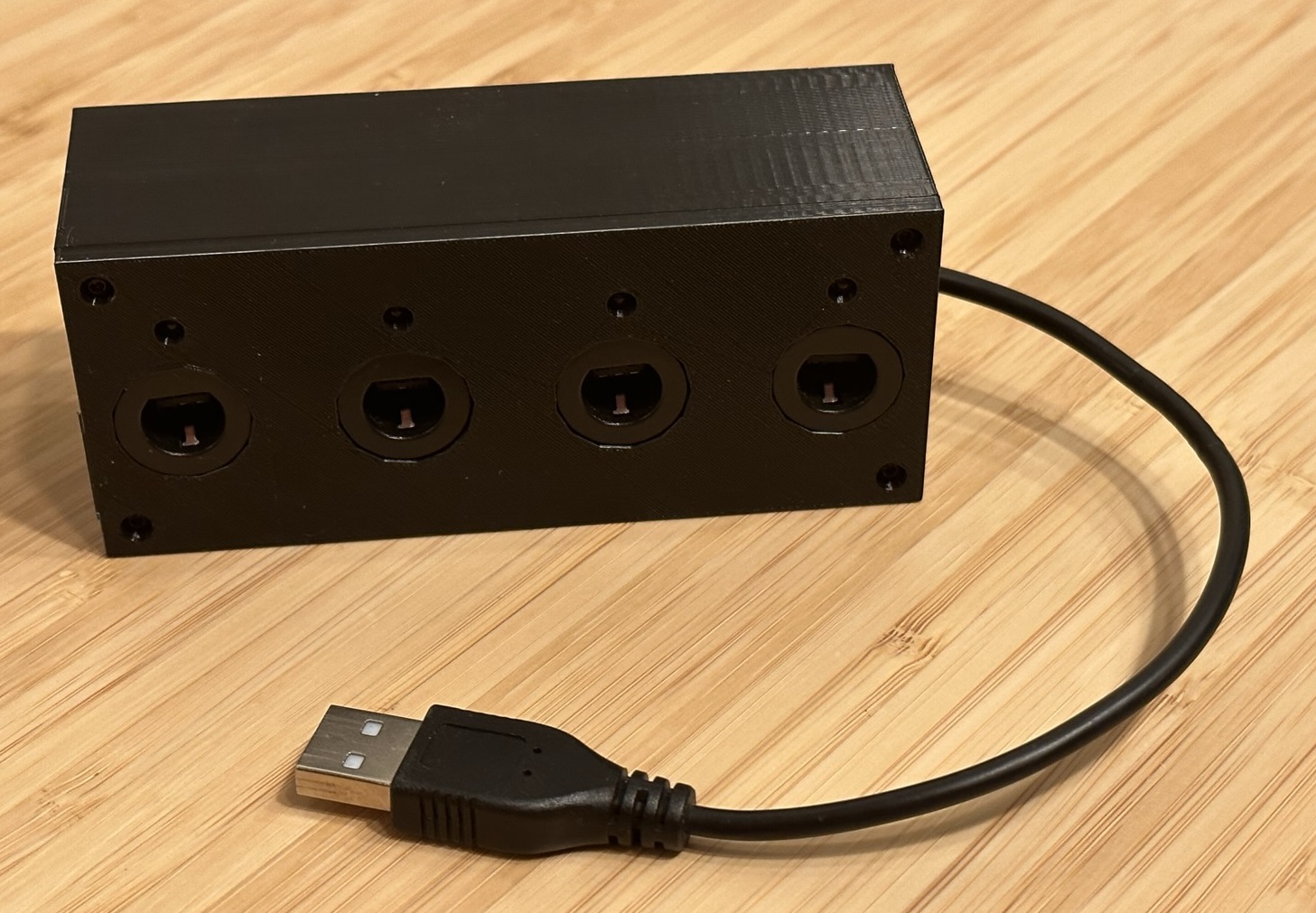 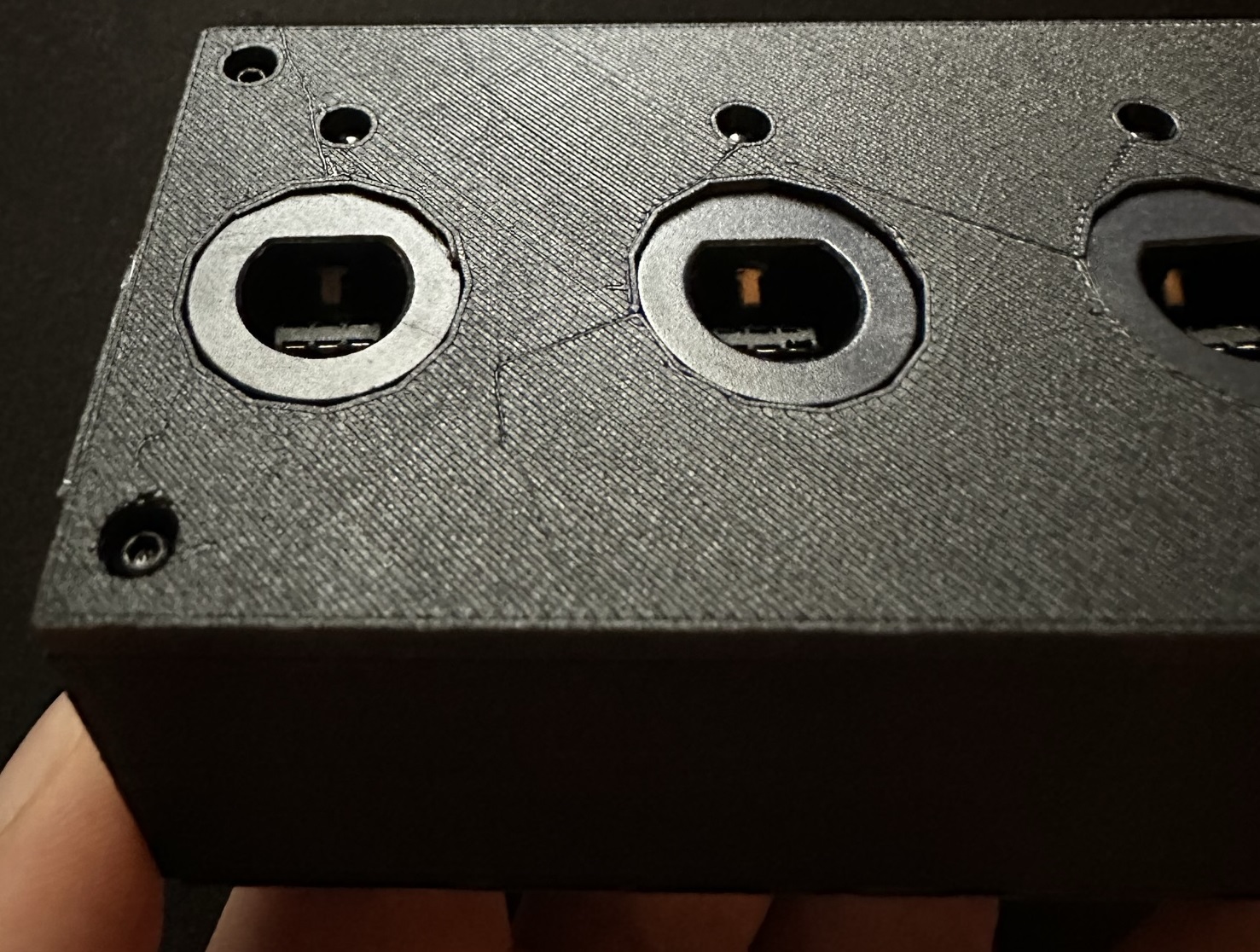 See how easily a tridecagon can impersonate a circle!

I hope going through the process of designing a model with tight specifications and printing it will help springboard me into mounting my Wii into the void left by removing the VCR from my CRT’s. It is a combination of easier and harder. Finding a Wii CAD model would be easier.

A major takeaway from this iterative design and prototype cycle is I desperately need to learn parametric design. So I can reference variables for sketch or model dimensions, make a change to the variable and the whole model gets recreated automatically. Ex: If I wanted to use larger screws I’d have to increase the radius of all holes, which also affects how much offset is around them, etcetera, etcetera. Not to mention I might accidentally skip one, being the dumb and error-prone human I am

There must be a better way to draw a circle 1.5mm away from a corner in both directions than drawing two straight lines from the corner adding the circle, then deleting those lines. If I draw circle and move 1.5mm in each sometimes there are constraints that got in the way?

I should probably watch all these tutorials so I can make better things and get better at making them.

Also, I took a lot of mostly useless measurements in the beginning, so being conscious of which are needed is a good time save. Maybe making a simple model of each board would have been worth the small effort…