On January 21, 2022 I bought a calendar from Walt's Organic Fertilizer Co. With the year coming to an end and my holiday season requirements better served by an advent calendar I sacrificed the Zen Cat Calendar and raised new life from its scraps with tape, forming this collage

I had never made a collage before, after taking down my calendar and holding it above my trashcan the idea struck me. Probably my favourite thing to be struck by

I removed the staples, cut each sheet in half, thumbtack’d them onto my corkboard which I still haven’t sold on Facebook Marketplace yet, and snapped this photograph.

I imported it in Procreate on my iPad and got to work with the freehand select and cut and paste tools! Shortly after starting I noticed how sucky and unintuitive it was and how I am overcomplicating it with technology just like Ted said! Scizors time!

I began pinning the clippings onto my corkboard, without poking holes in them and got a general idea of how they should be arranged. Any unfilled space would be improvised using background textures to fill. This plan is mostly represented in the final version but some edge bordering cats were relocated to accommodate the afterthought of centring of the halo cat. 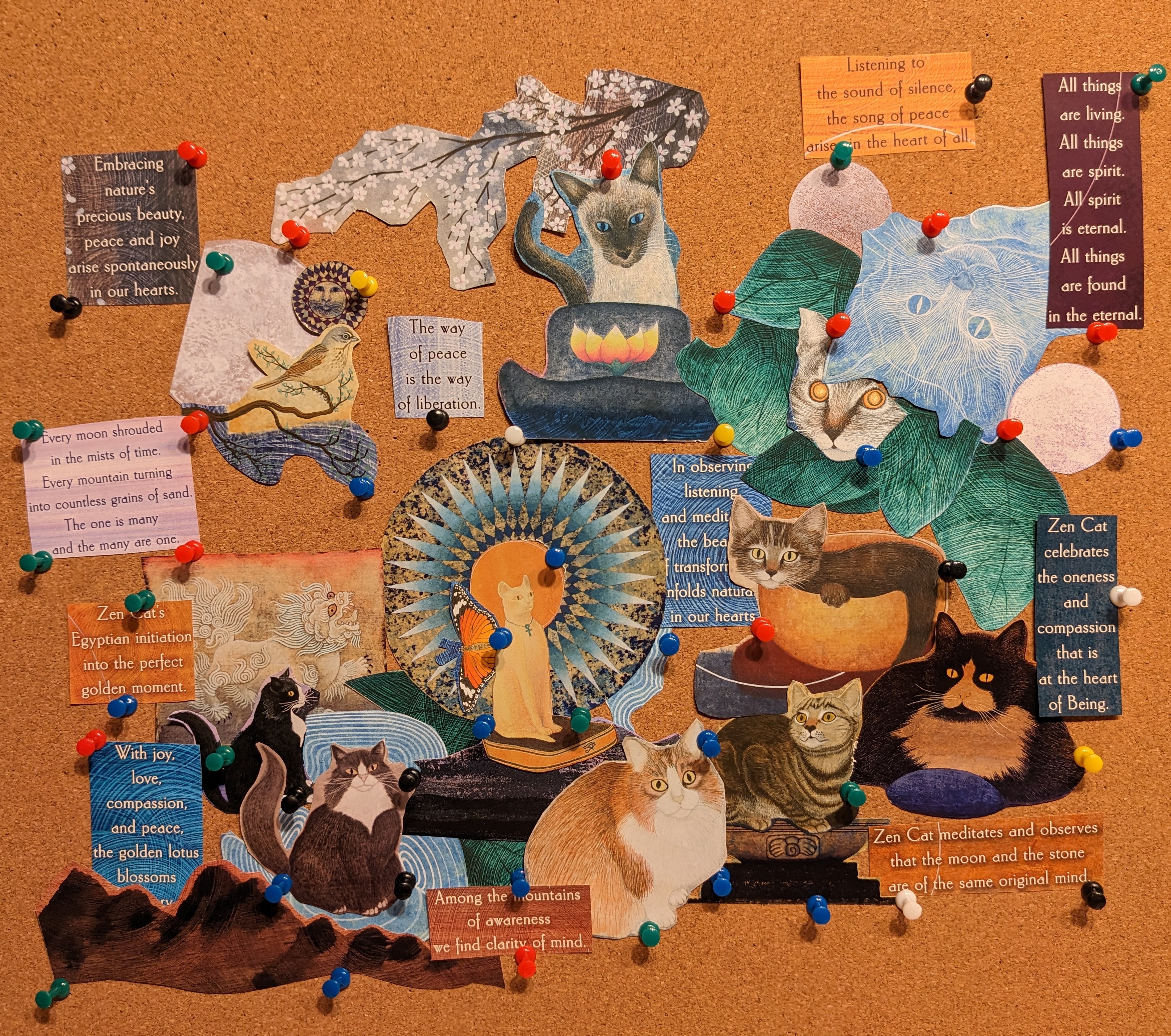 I first taped down the cat head with the radiating halo shape on the back sheet acrylic and moved outward starting with lower z-index clips. Double-sided tape made avoiding tape from being visible on the frontside a cakewalk! A tricky part was getting small pieces that had tape on them under the edges of others without them sticking early which mostly occurred at the end when I was filling empty gaps between the kitties. Putting just a small square of tape in the centre of pieces alleviated this trouble though and in the end I would KFC double down tape anything still flopping around and ultimately it would be held down flat by the front acrylic sheet anywho

I purchased two 1/8" acrylic sheets from Frame Central Capitol Hill, both cut to the size of 18" x 15". The lady who helped me was great and very helpful, thanks for the first time artist discount too! She also left me with a scrap cutoff piece to practice drilling on to reduce my odds of cracking the sheet, which was avoided! I first checked Blick Art Materials, but they were out of stock and time was of the essence, it will be a Christmas gift and momentum is an essential ingredient to anything I do — I’m learning this about myself. That’s why I bit the bullet on buying the more expensive acrylic from the store since I could have it now! I did get double sided tape at Blick (not to not leave empty-handed and be perceived as a thief though, like some have paranoia of) which was the right choice over glue: possible bad adhesion to the acrylic or drying a weird colour, and been much more messy.

The hardware was purchased from The Home Depot. I picked up some 1/4” bolts of 1/2” length, nuts, and some “invisible” hanging wire to pass through the two extra holes at the top.

To secure the sheets together I drilled several holes 1/2” from the border for the nuts and bolts. Additionally, there are two at the top to thread through the hanging string (not pictured) which I will include when mailing. I clamped the sheets together and elevated them with some wood and drilled through both simultaneously to avoid any measurement errors. I had to go to the workshop since my spur wood bits weren’t cut out for acrylic 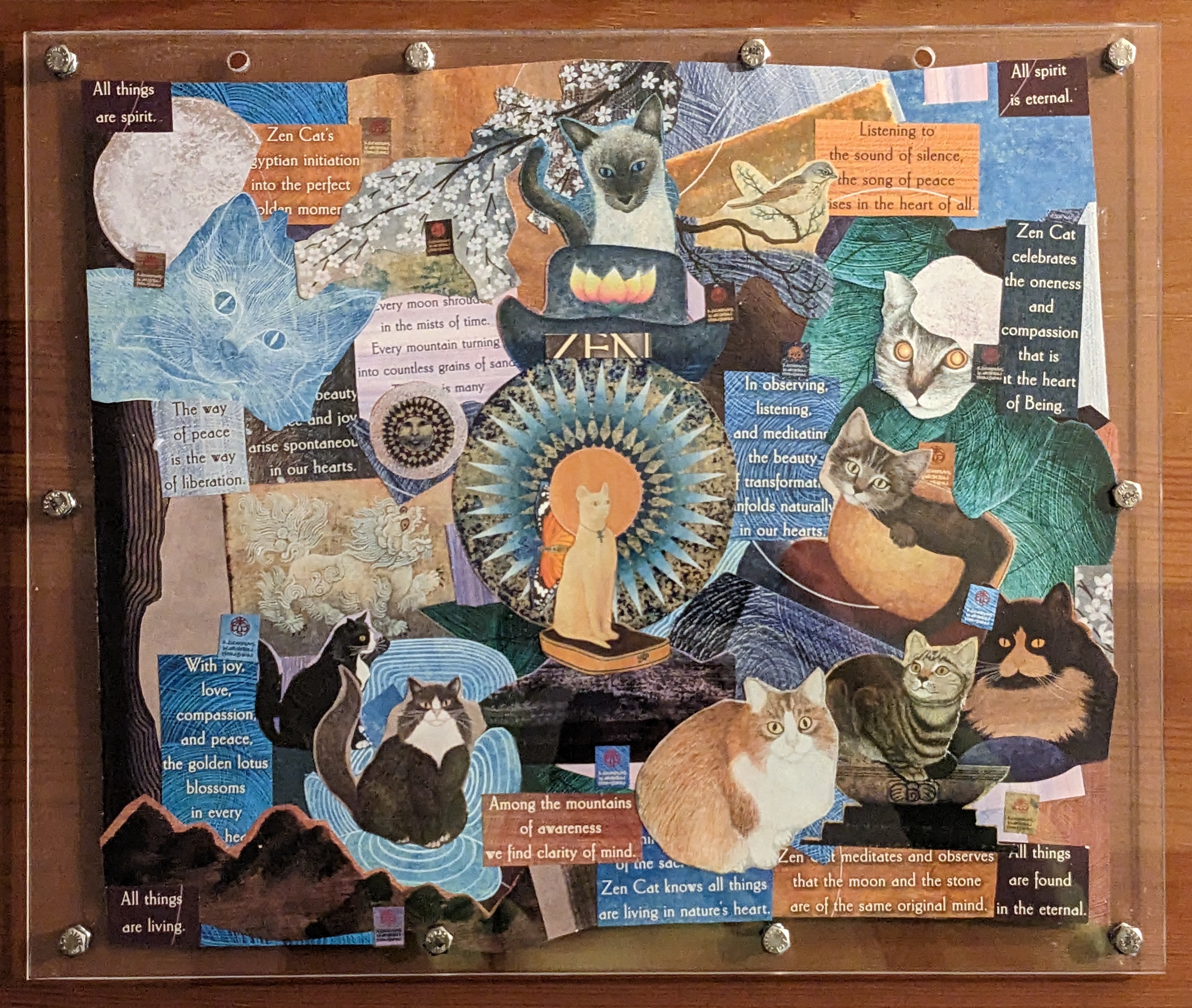 I’m quite happy with how it came out and hope it is enjoyed! Fun dipping my toes into a new thing is always fun! It kind of reminds me of the album cover to Modest Mouse’s Sad Sappy Sucker album when I quickly glanced at it just now, which was one of the seventh vinyl I ever owned 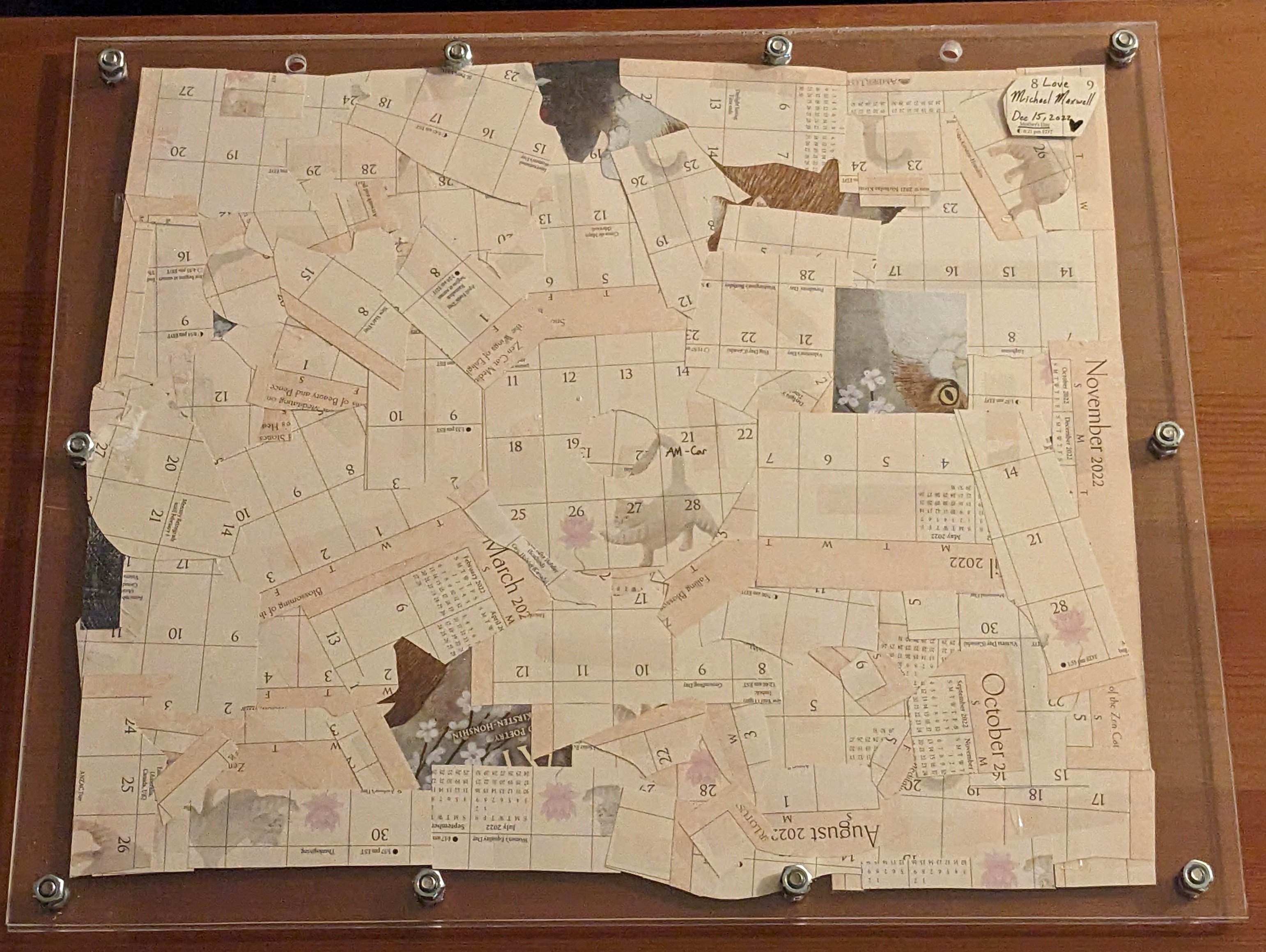 The backside also looks kind of like an old pirate’s treasure map if you squint hard enough. You can also spot the pieces that came from the cover since it had art on both sides. After I threw out the scraps I wanted to sign it so I went garbage picking and one of the scraps just so happened to be Mother’s Day: kismet. 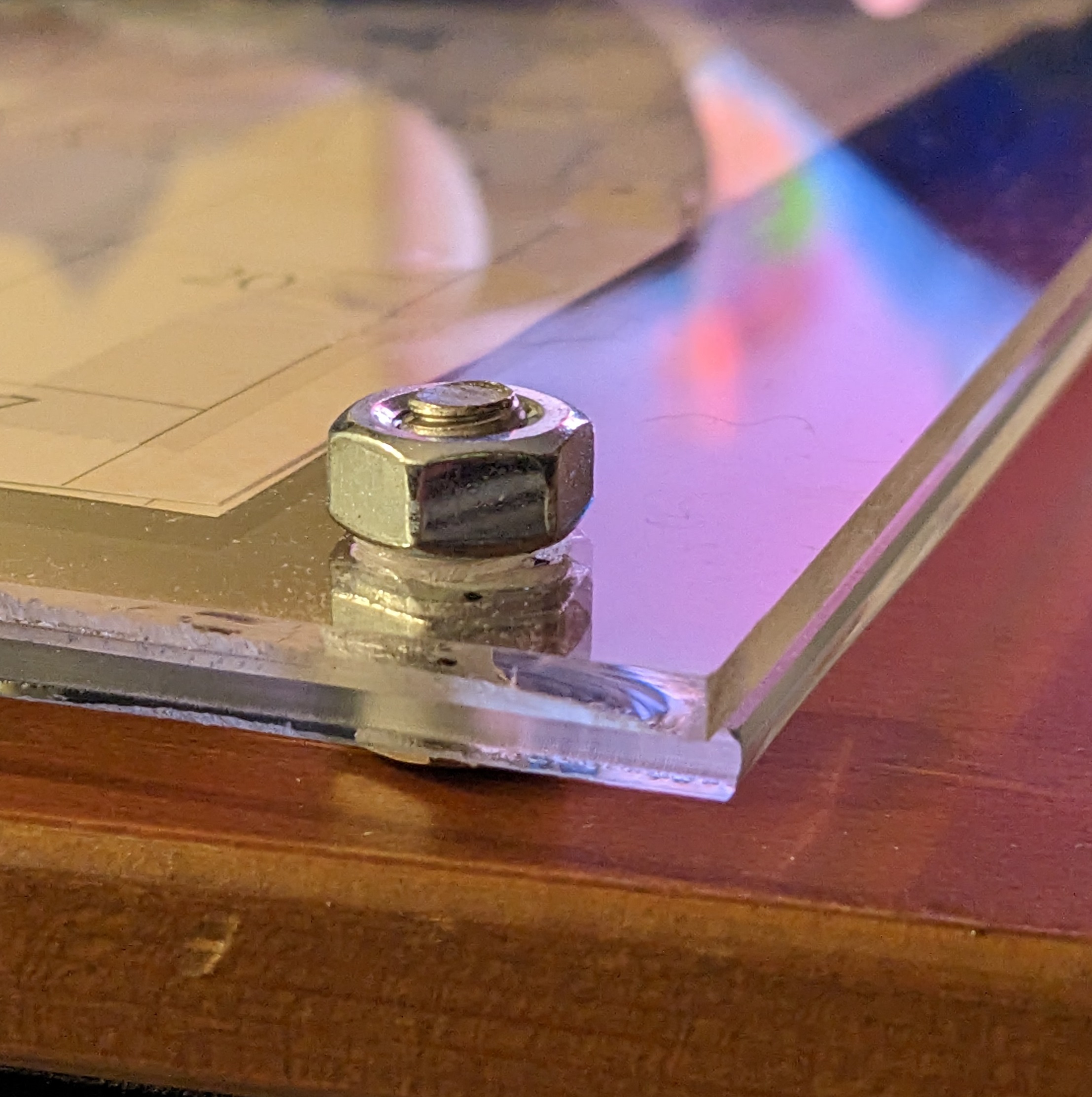 It’s also not perfectly cut and square. I was also trying to make it completely opaque and I missed some small spots which I can locate by holding it up to a light. The hardware is not the prettiest thing - let’s say I was going for an industrial look, ya that’s it! My nailbrush, which I think everyone should have one by the way, is from same garden centre the calendar was purchased. Not to mention a plant I paid for that I never received any update pictures of and I hope died. You can see I did barely got a thread of extra on the other side of the nut. The perfect amount to not be wasteful I recently researched after noticing streetlights with their massive nuts and bolts extending. Be less wasteful SDOT! Maybe there’s a reason for it that I don’t know and if so sorry for the prior ignorant comment.

since I didn’t get to see you much this year I thought I’d give you 365 cut up little days in penance.