I wanted to properly exhibit and recognise the best band of all time in my humble abode. That band is, of course, none other than The Beatles as you know from not only reading the title of this post, but also your own fine judgement! And so what if their name is a pun, get over it

My Dad’s best friend gifted me several The Beatles vinyl records. He bought them as a kid and they had been in his collection ever since. Fortunately for me, some included artwork! I ended up framing both of the posters which came from The Beatles self-titled album (the White Album).

They were professionally framed at Blick Art Materials on Broadway in Seattle during a frame sale in November 2021. I chose all the specifics, frame type, backdrop colour and spacing, floats, etc. with guidance of the employee, of course.

I’m happy with making this investment since I plan on having these for the rest of my life. I’ll have to learn how to make frames myself in the future though

The portraits are separate pieces and are mostly fully intact without large rips, just some minor ones and wrinkles and push pin holes in the corners, which I think adds to the piece.

I wanted to the order from top left to bottom right be John, Paul, Ringo, George, thus matching the Let It Be album cover A funny moment came from this when the gentleman working there was aghast from reading the layout notes taken by the younger female employee:

This is currently in my apartments hallway. Some mornings while brushing my teeth I’ll gaze into their eyes, especially John and Paul since they match perfectly up to my eye level. That’s a little meditative thing I do that I probably shouldn’t admit to publicly, but why should I accept judgement from you anyway, someone who read all this nonsense and didn’t just jumped to the picture section

This one had more damage to it, which was expertly handled by the framers and is hardly noticeable now. This combination of black and white and colour photography, doodles, film camera strips, and composition is pleasing to look at from afar and also up close. This is currently hung to the right of my desk so I see it for hours a day in my peripheral.

The matting covers 1/4” from each edge and conceals a stamp saying something like printed in Canada. 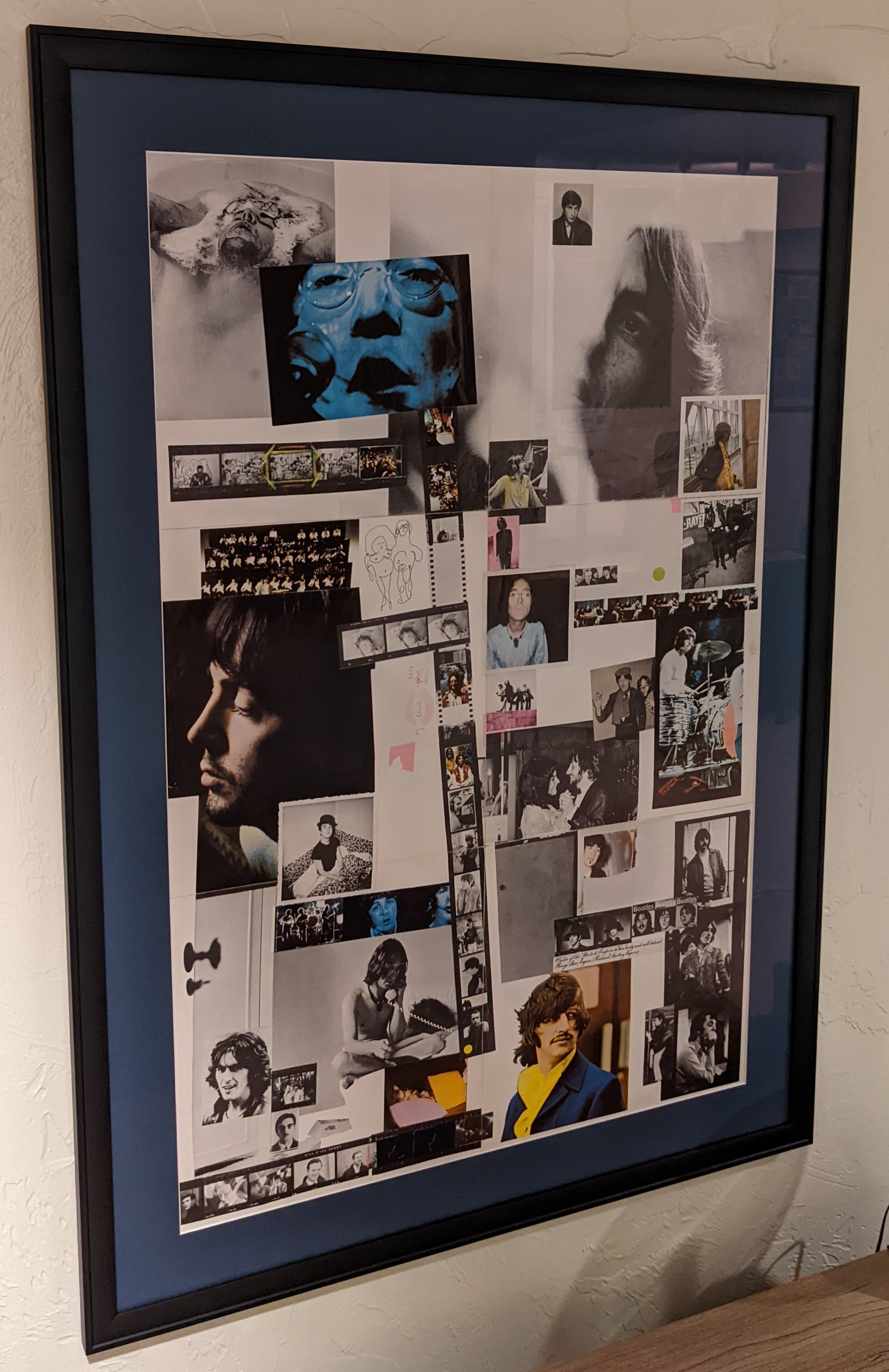 This was the third “The Beatles” poster I received but decided not to frame yet. This is nailed into my bedroom wall and I thought I’d include in this post since John was at least a quarter of The Beatles.

I was being overly precise in calling them The Beatles in this post as a bit, I’m not above dropping the The.