For Christmas, my Mom & Dad gifted me a 3D printer. On Black Friday, mid Californian-roadtrip, I put in the order for an Ender 5 Pro with spools of black and white PLA filament. Sorry, but I was unable to contain my excitement and wait until Jesus’ supposed Birthday before using it

I’ve never used one before and the only experience I have 3D modelling was a couple days in Grade 9 tech class using AutoCAD to design a rudimentary airplane that I would later realise in wood. I’m excited for all the possibilities having a 3D printer will unlock. There are several 3D printers at the Microsoft Garage in Redmond that I could also be making use of… then again, most of my inspiration comes at inopportune times.

Here are all the things I have printed so far in chronological order and the .stl files of my designs.

Now that the construction part is complete, I’ll run a test print! Since this is the first print, I must calibrate the print head to be only slightly above the print bed in its home position. Once that’s done, I set the extruder temperature to 205° C and guide the filament through the tube to the print head until some begins to extrude. The printer came with a micro SD card and a USB adapter for it. The files included on it were the Creality Slicer application, several STL files and some already pre-sliced files. I decided to go with the 10x10 maze since it only takes an hour to complete and uses minimal filament, since my goal was just to see if the thing worked. After slicing and exporting the file to the micro SD card, I plugged it into the Ender 5 Pro and selected it from the menu and waited the hour. Great success 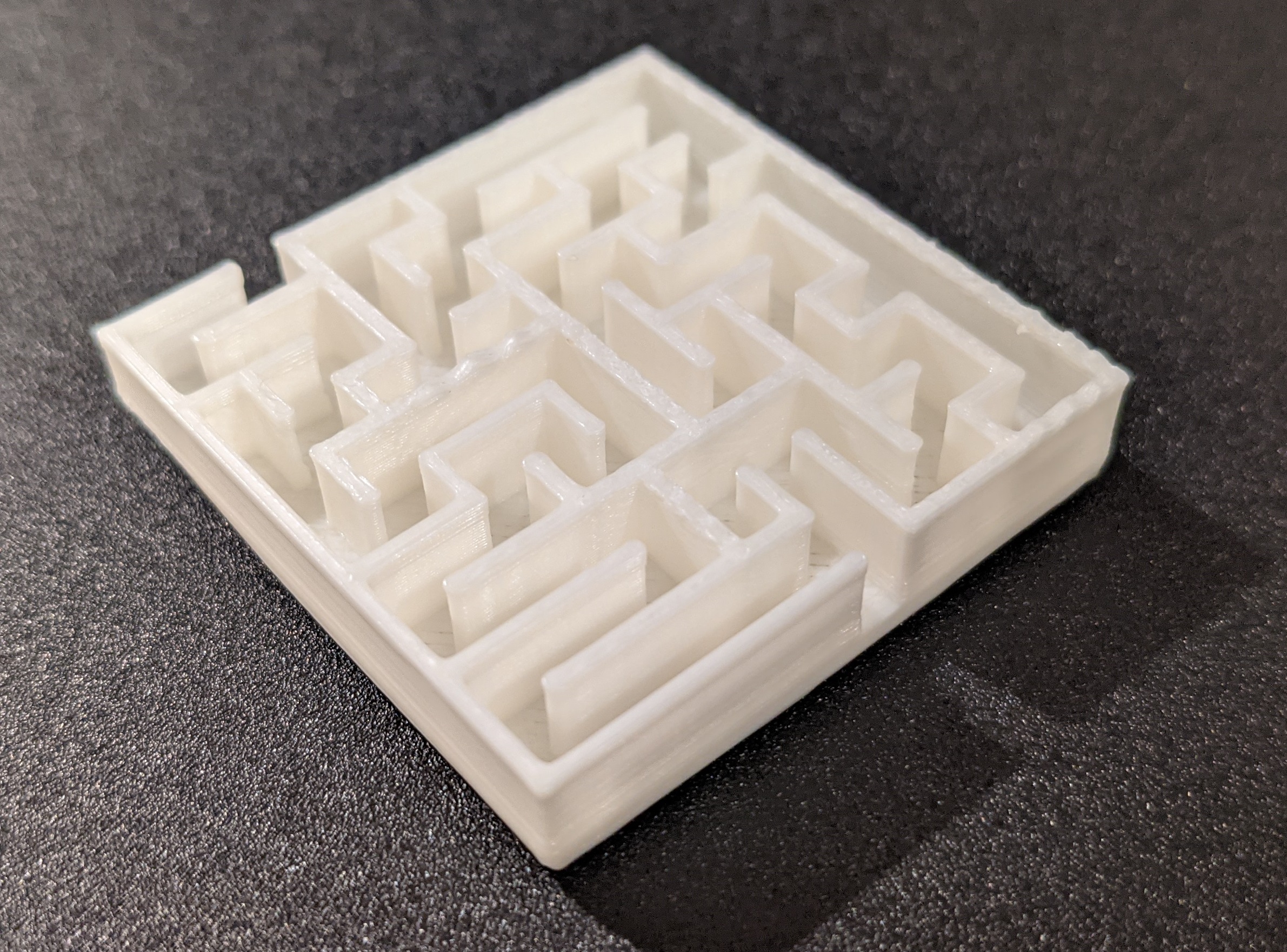 In my bedroom I have a projector (that Amazon refunded because they thought I never received it) up on a shelf pointed at my uneven wall. The angle adjust on the projector only elevates the front side and I need to angle it downwards. Poor planning on my part for at what height I decided to mount the shelf, maybe, but let’s not play the blame game! I had been using some Ottawa Senators coasters to prop up the backside which worked fine, but not ideal. So, I took some measurements of how tall I needed the feet to be and once again avoided learning how to 3D model something myself and moseyed on over to

Here’s the thing that I used: Projector Feet Prop 2 Inches. I loaded the .stl file into Creality Slicer, rotated it so the base of the cone-like object was on the bottom and laying flat on the printer bed. Then scaled it to a height of ~26mm. I then duplicated the object so it would print two at once. An hour later I was scraping the feet off the print bed and removing the support structure. These feet are ready for prime time!

I also have the keystone correction maxed out

For @katiekatie12341. She asked if I could print and mail her a safety clip for her bear spray since they don’t ship to Canada. C’mon UDAP, figure it out! Anyways, the model was already available on Thingiverse so printed this at 15% infill and with four shells as the creator recommended. Mailed to her friend in North Vancouver and hopefully know her bear spray never goes off unintentionally 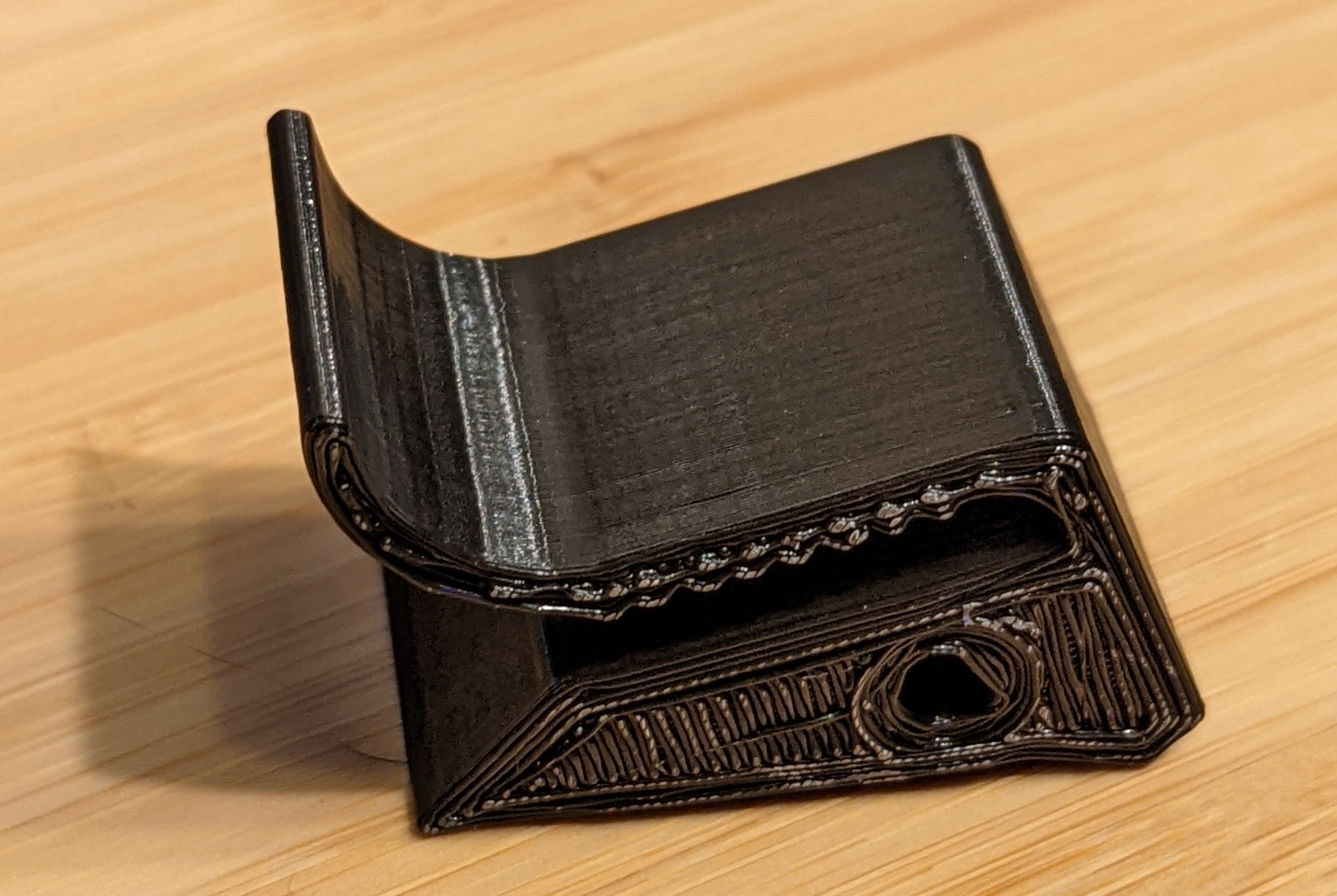 PS: I was happy to help and more just happy to be thought of as someone people are comfortable reaching out to and asking for my help

I broke my shower tap. Now it’s just this metal thing. Luckily I had a spare wrench and have been using that, just as my landlord ended up suggesting! 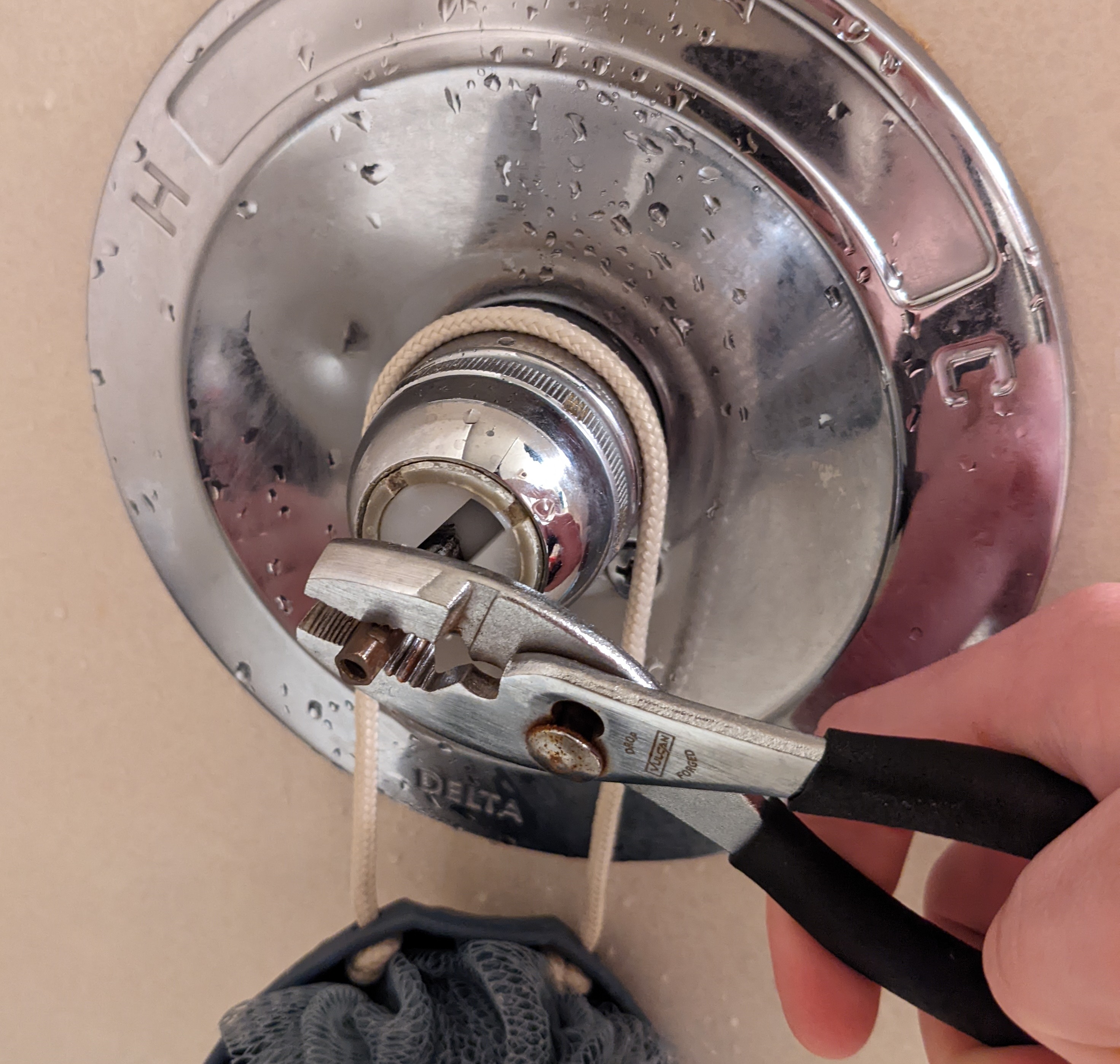 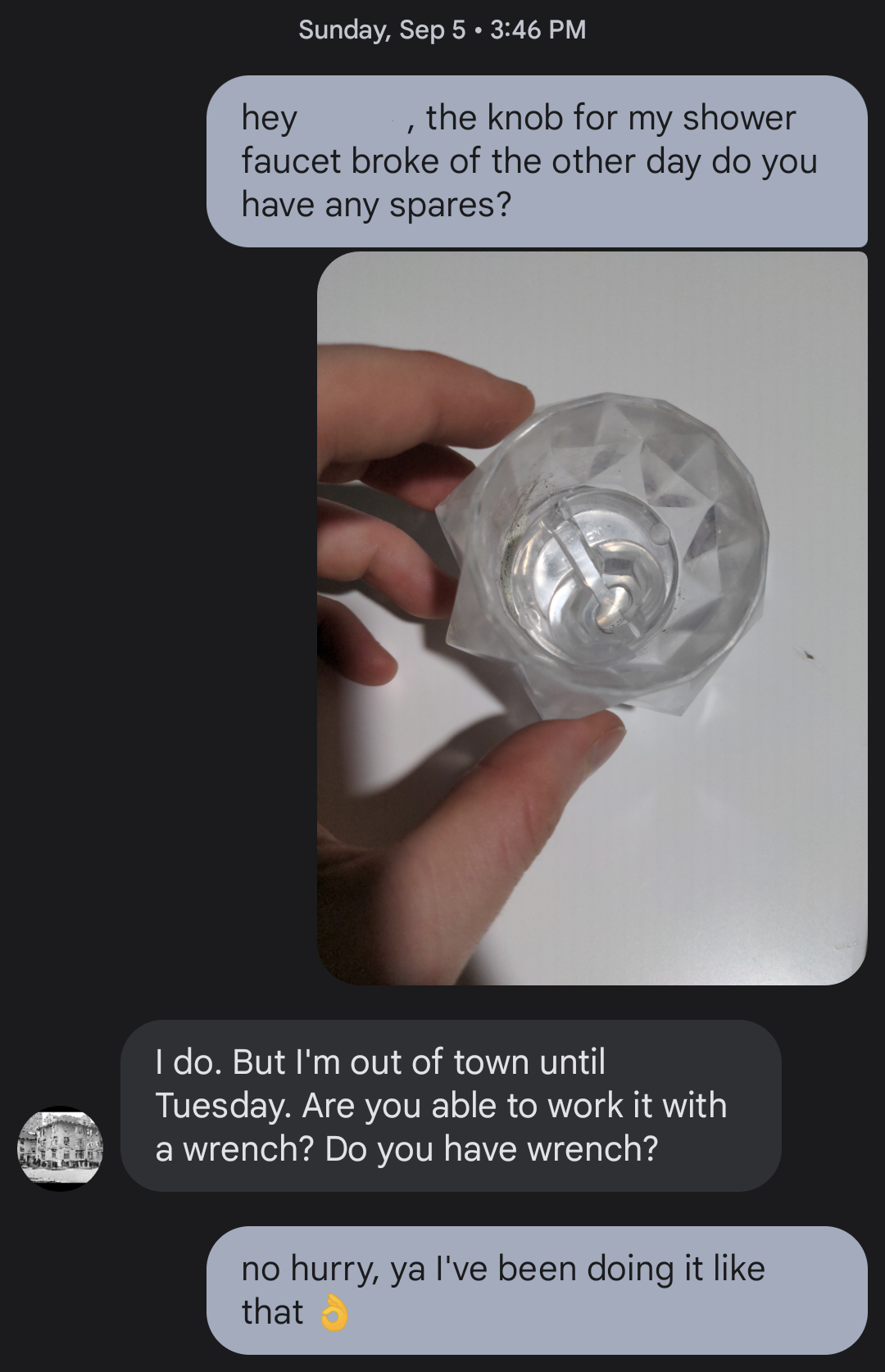 It’s not very classy or as convenient though. Time to print something up! First I replicated the part that went over the metal arm to make the prototyping phase faster. Once that piece was worked out I extended some knobs off it for the final product. 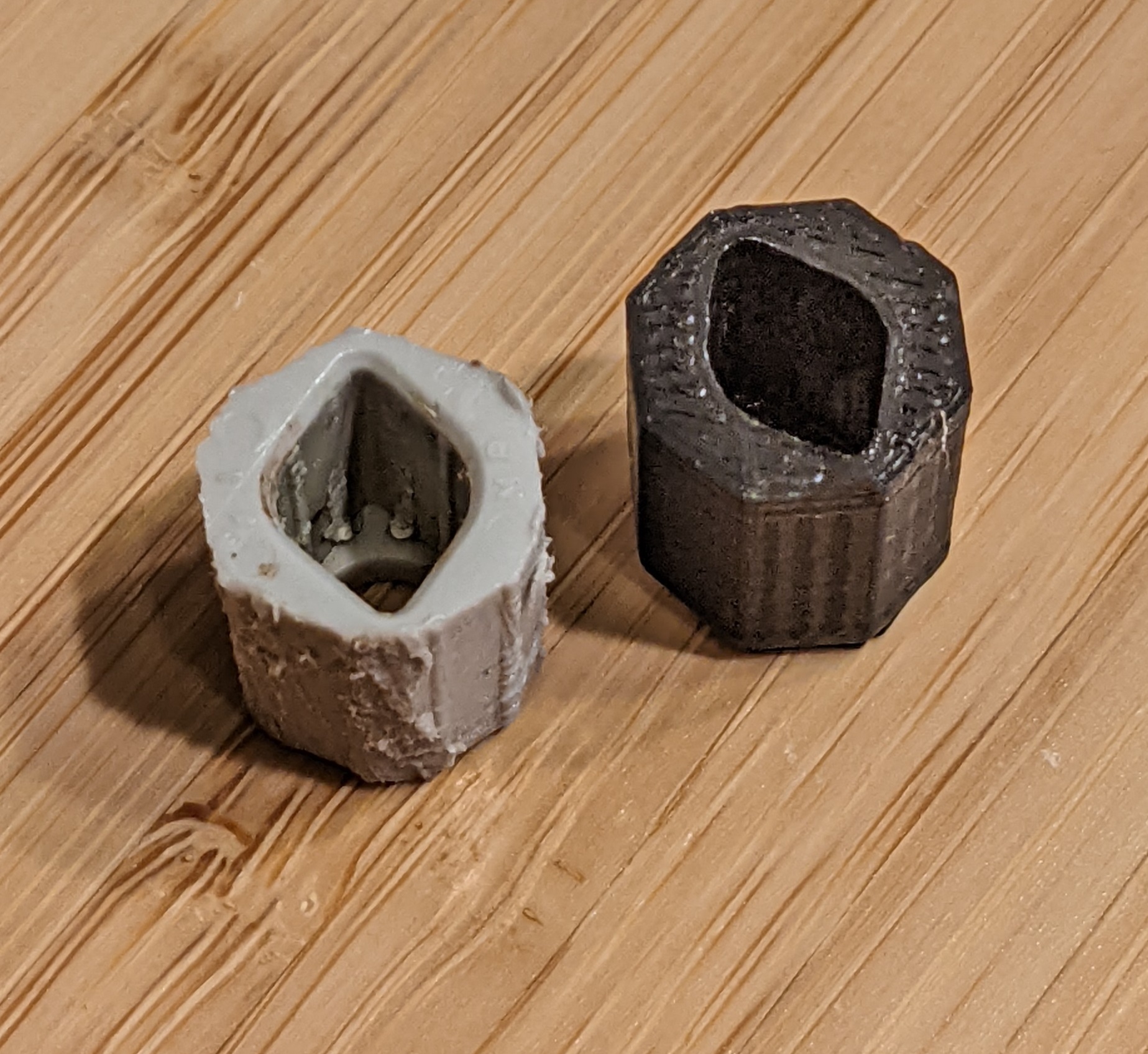 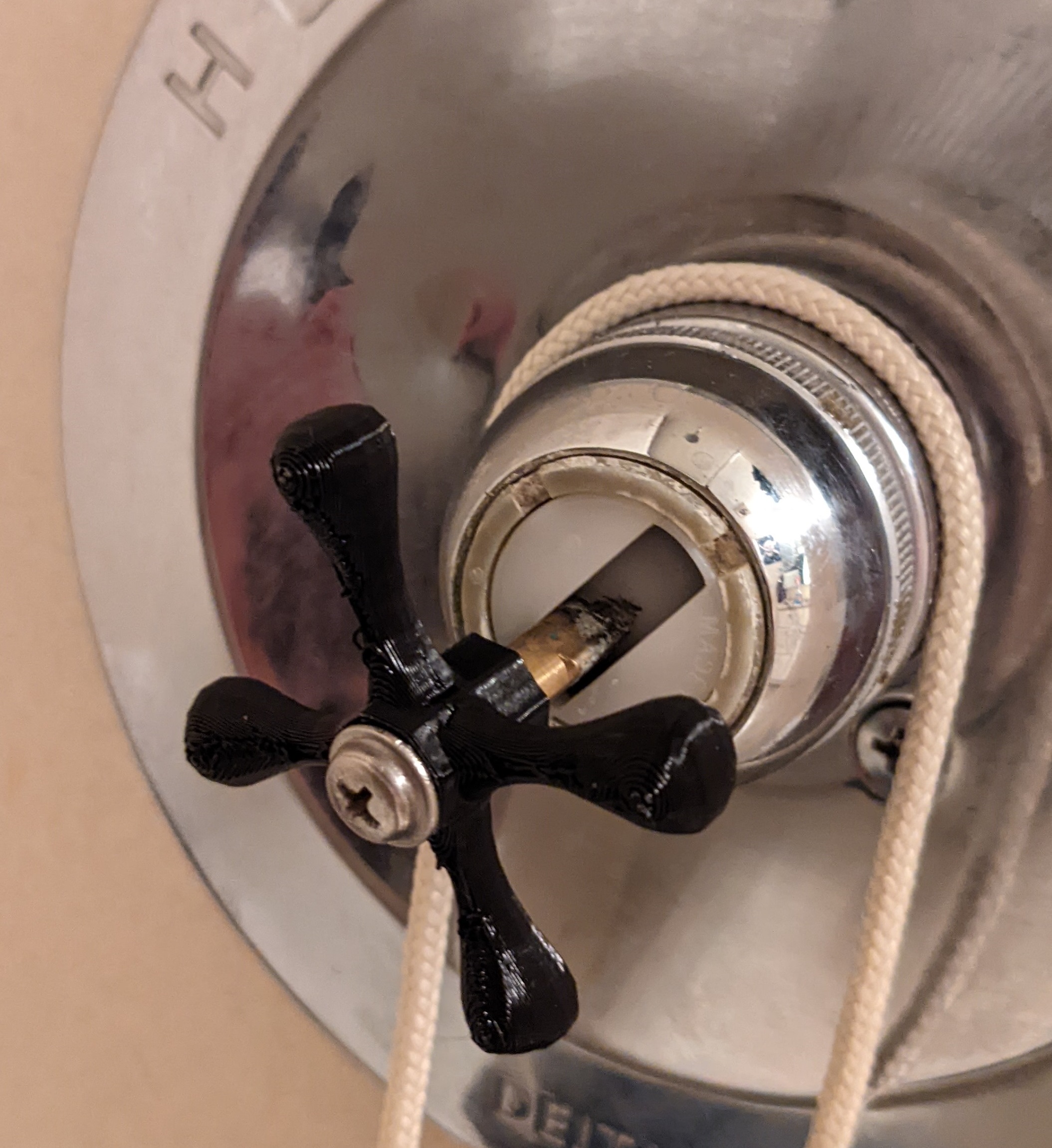 After about 4 months it started getting loose and then one of the arms snapped, leading to its death on Oct 1, 2022. 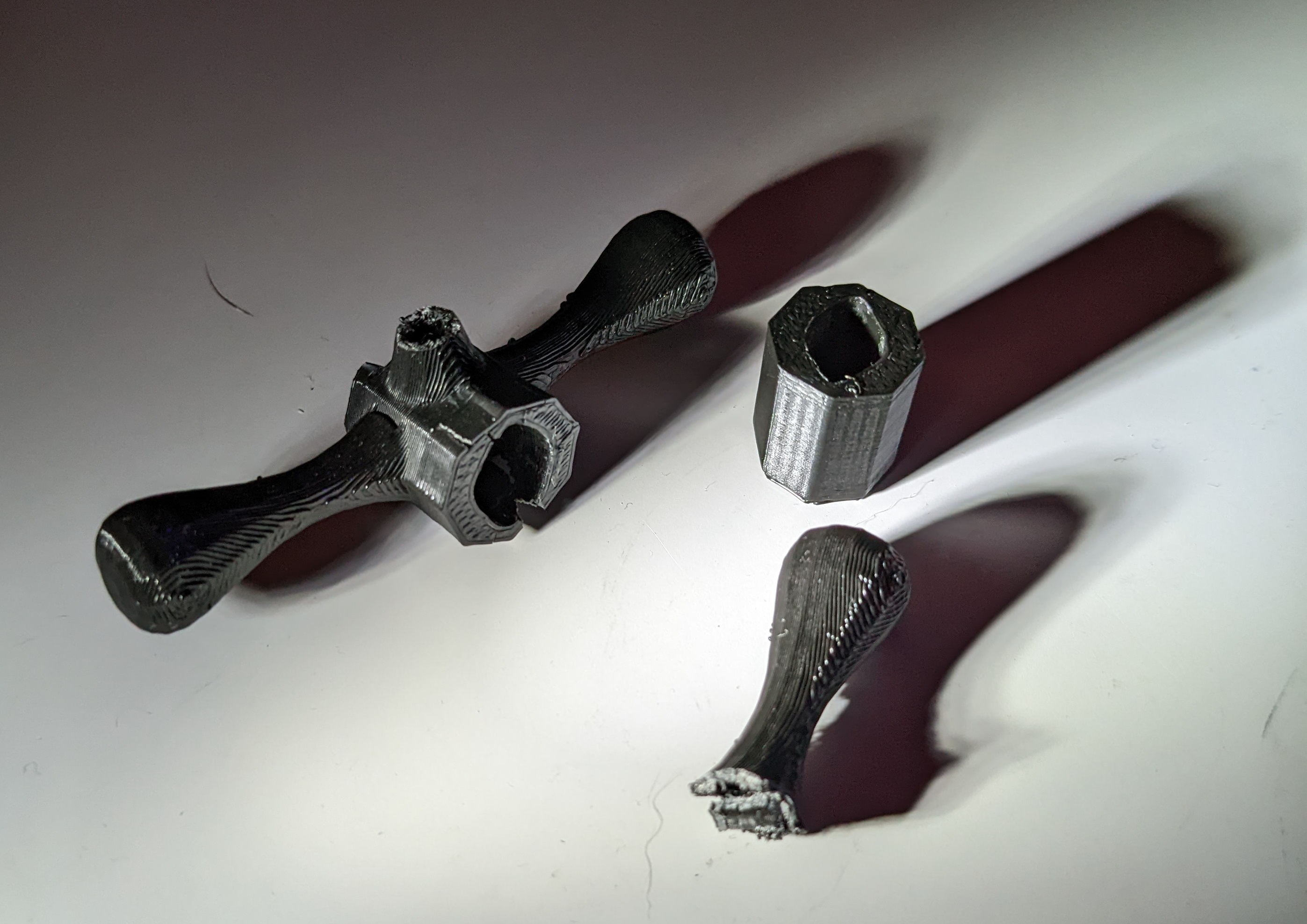 I will attempt to ameliorate the loosening by making sure I use a high infill percentage. To strengthen the knob I will be making it more of a disk shape so the force hopefully distributes more evenly than before. I will also add vertical supports to each “prong” since to open and close the water you move the knob up and down respectively.

The original shower knob was one of the first things I designed myself, and so in my beginner shortsighted mind I apparently did not save it anywhere… I might have the design I made on paper with measurements somewhere, but that’s like finding a needle in a haystack

Luckily, after some rummaging I was able to find my first prototype replica of the actual main connection to the metal level of the shower apparatus, which I can take measurements from and import a photograph to get back to what I love most, showering 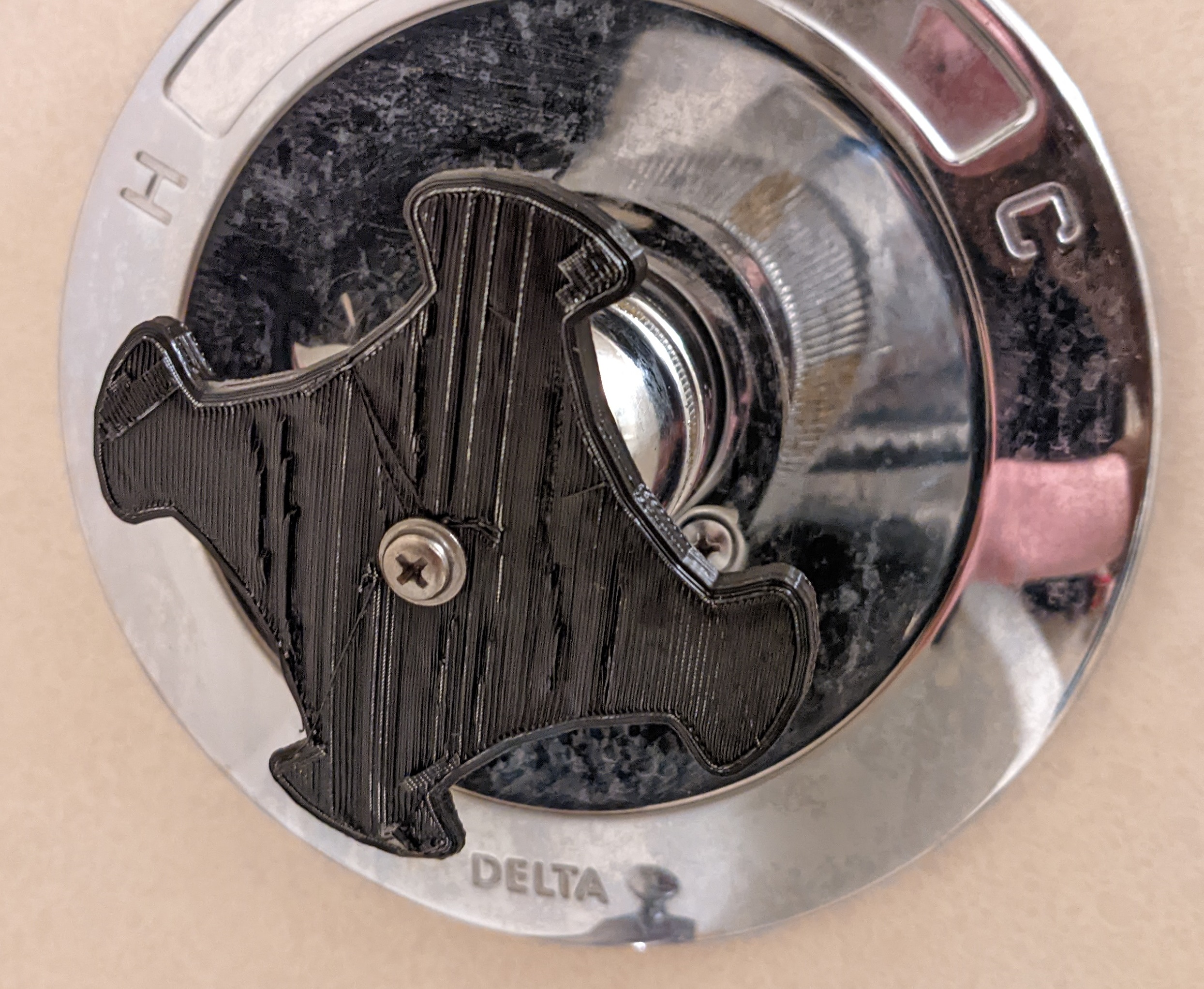 Not completely happy with how the front looks, maybe I should have printed it flipped. Or I could add faces to it kinda like a Beyblade 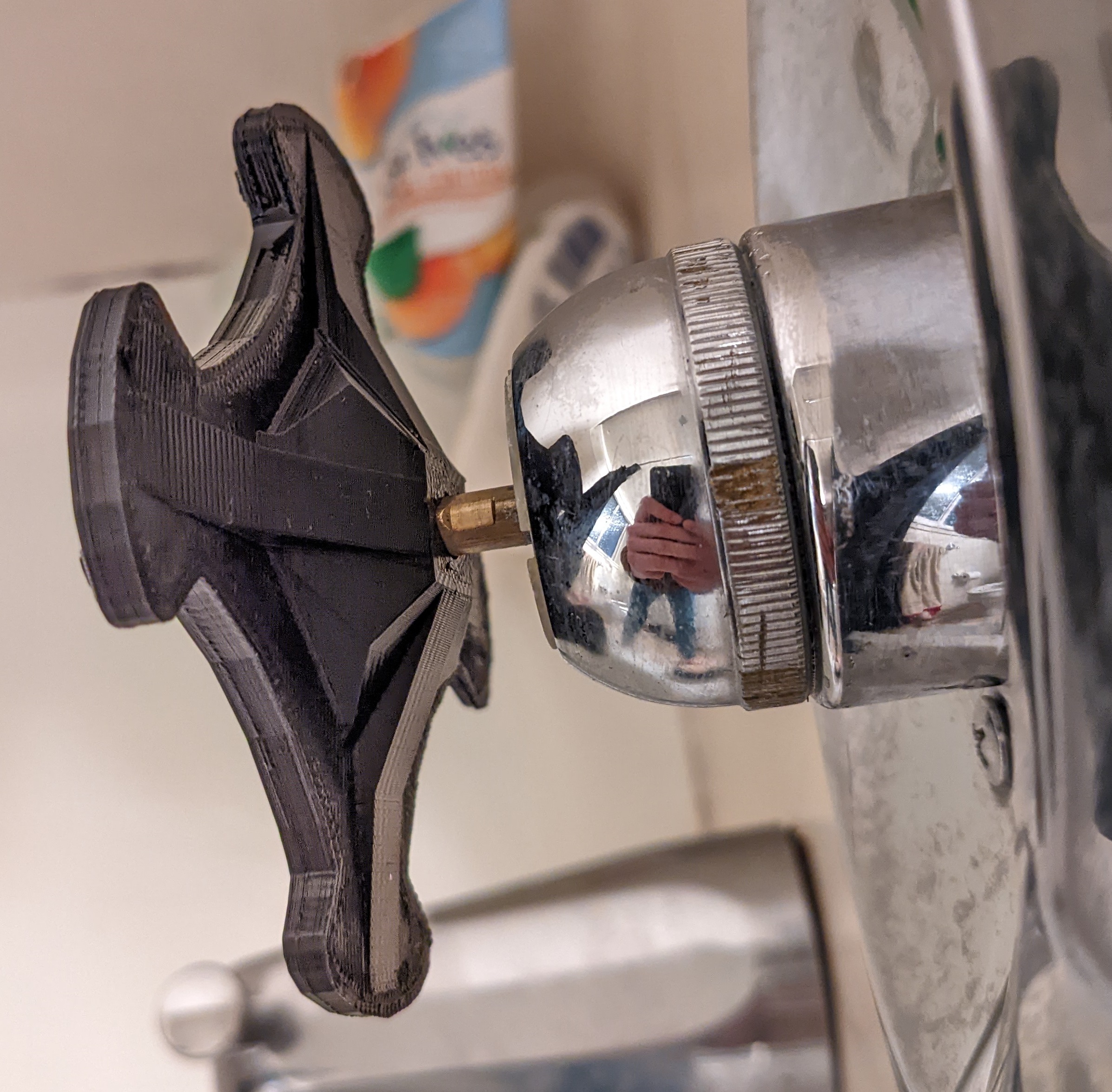 How can I try to avoid losing as much data as possible? Document measurements I take? I really should probably switch from Shapr 3D to Fusion 360 so I can make parametric models, making design tweaking vastly easier, working with Play-Doh vs. Marble.

Both this and the next item were custom designed for cleaning up the power and networking cables in my TV unit. First, I have a D-Link 5-port network switch that connects my TV, Xbox, Sonos Soundbar, PC to my router.

Tips I learned from making these:

I realized now the ultimate setup for clean cables is no cables at all. I’m running all WiFi now

I might still do this since there is unfortunately not WiFi for electricity, thanks Nikola…

At least I got this artsy photo of my failed mounts and my Phillips bit permanently stuck in my stubby boy. Using a secondary light source is actually just a game changer and looks really cool.

I added a bunch of hexagon holes to the piece so it would print faster… That’s apparently a myth. They only save on material. That blog post says a good rule of thumb is adding surface area, which the “speed holes” do, increases print time. 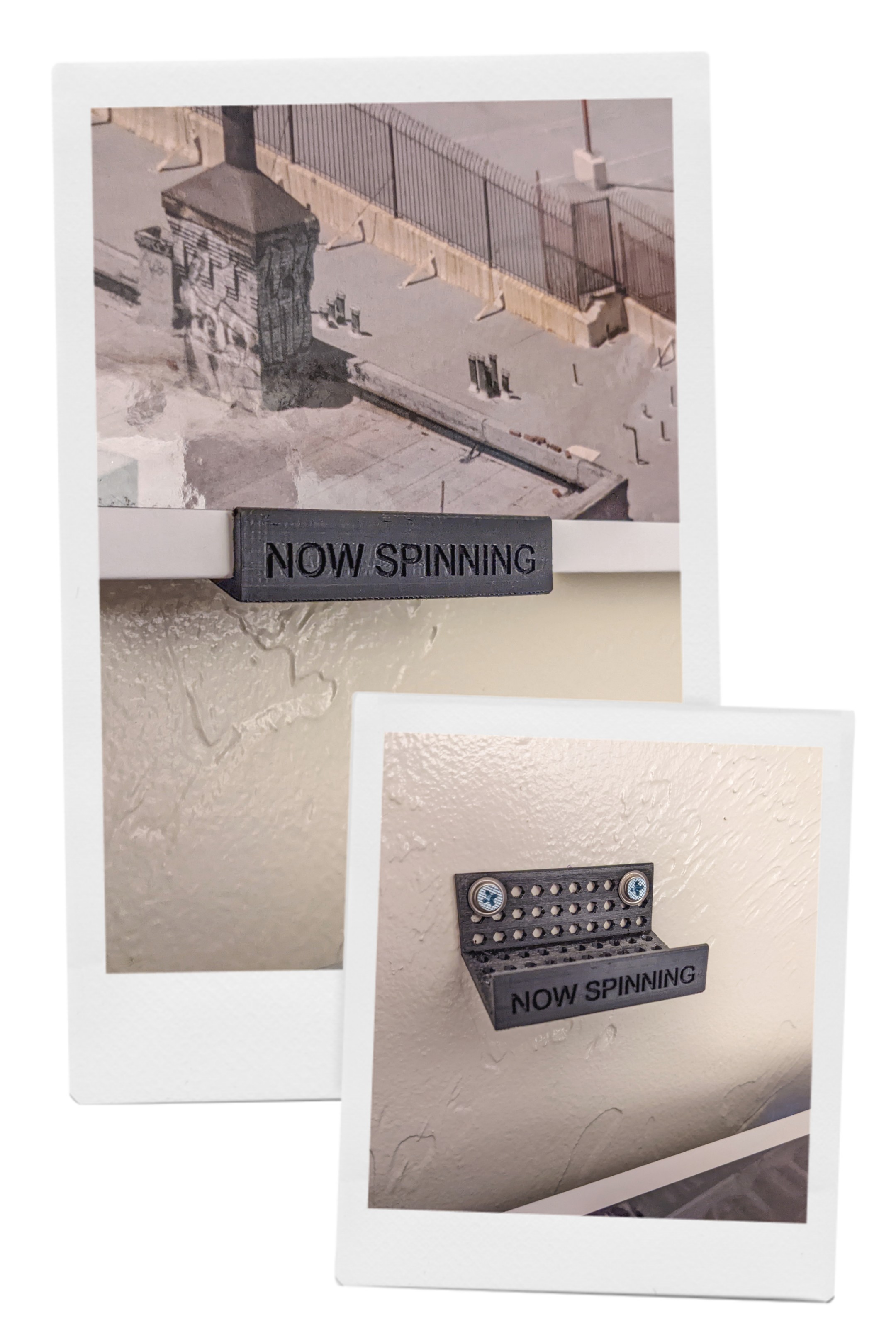 - just another step to boujee up my place! I took some inspiration from these two I found on Thingiverse.

Just went with a random shape, that was able to conceal the bolt, nut and washer. I could sand and polish it to get it to look closer to the porcelain bowl once I acquire polish and the varying degrees of grit sandpaper (200-3000). Spent about 5 minutes getting the measurements and designing it and kicking off the print. I was tempted to duplicate the model in my slicing software (since I need two of these) and run both at once but it’s good practice to ensure the design works first before wasting material on a part that potentially doesn’t get the job done.

In fact, the resulting print did not fit. The measurements were right though for some reason the printed piece had an inner diameter of 9.74mm when I modeled it to be 11.2mm. My quick and lazy fix was to increase both the X and Y scale by 1.15x in my slicing software, which hopefully gets the right size…

I also have a regret on my model design since it has a crevice that will make it a little harder to clean - a design principal that I think about an unhealthy amount. If it wasn’t already the next day (12:02 AM) then I might redesign it but I already have to stay up until this print finishes to test the fit, then hopefully just kick off another of the same print right after so I can make it to bed before the boogeyman gets me

Anyways… here’s the before and after! 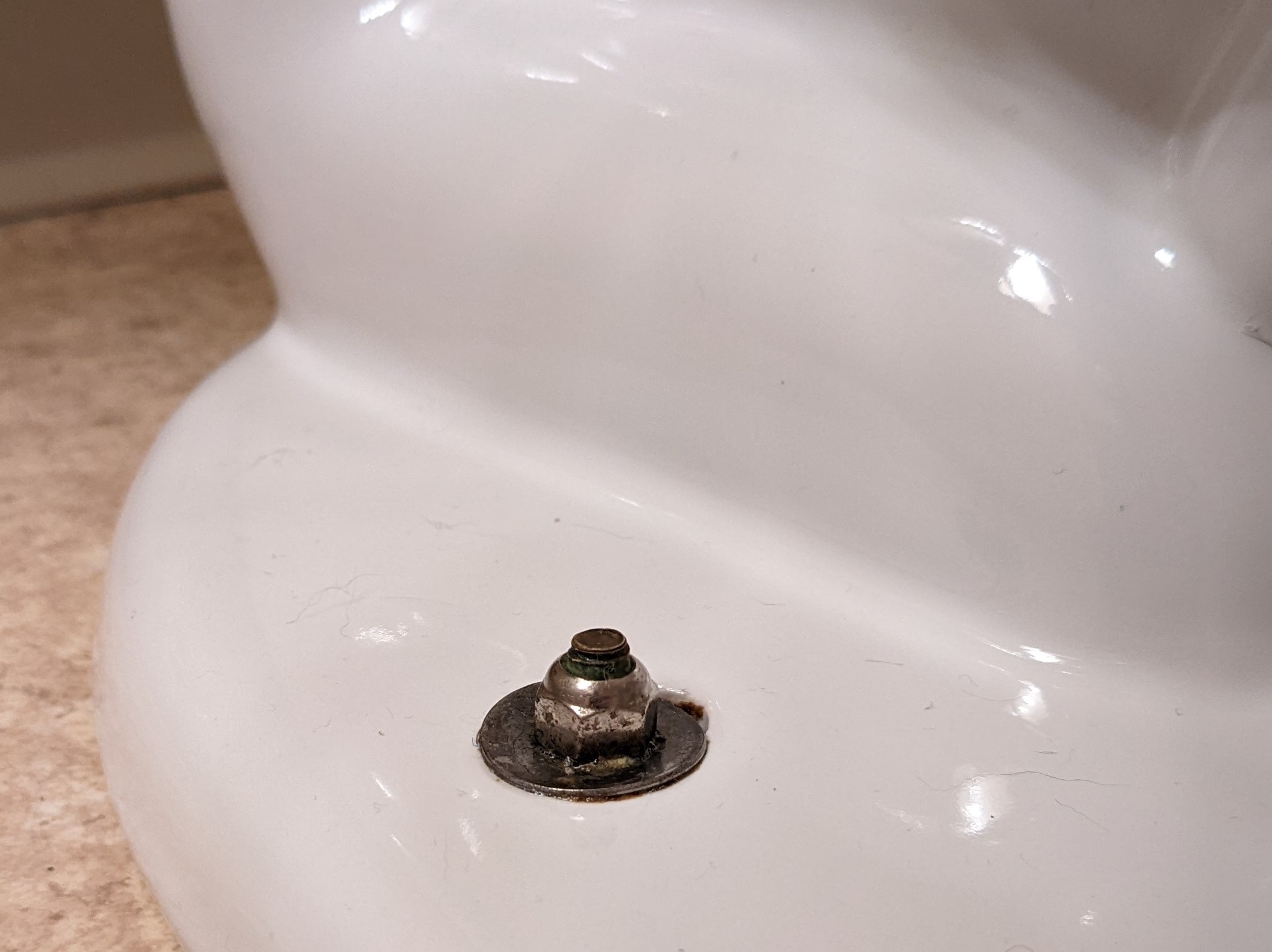 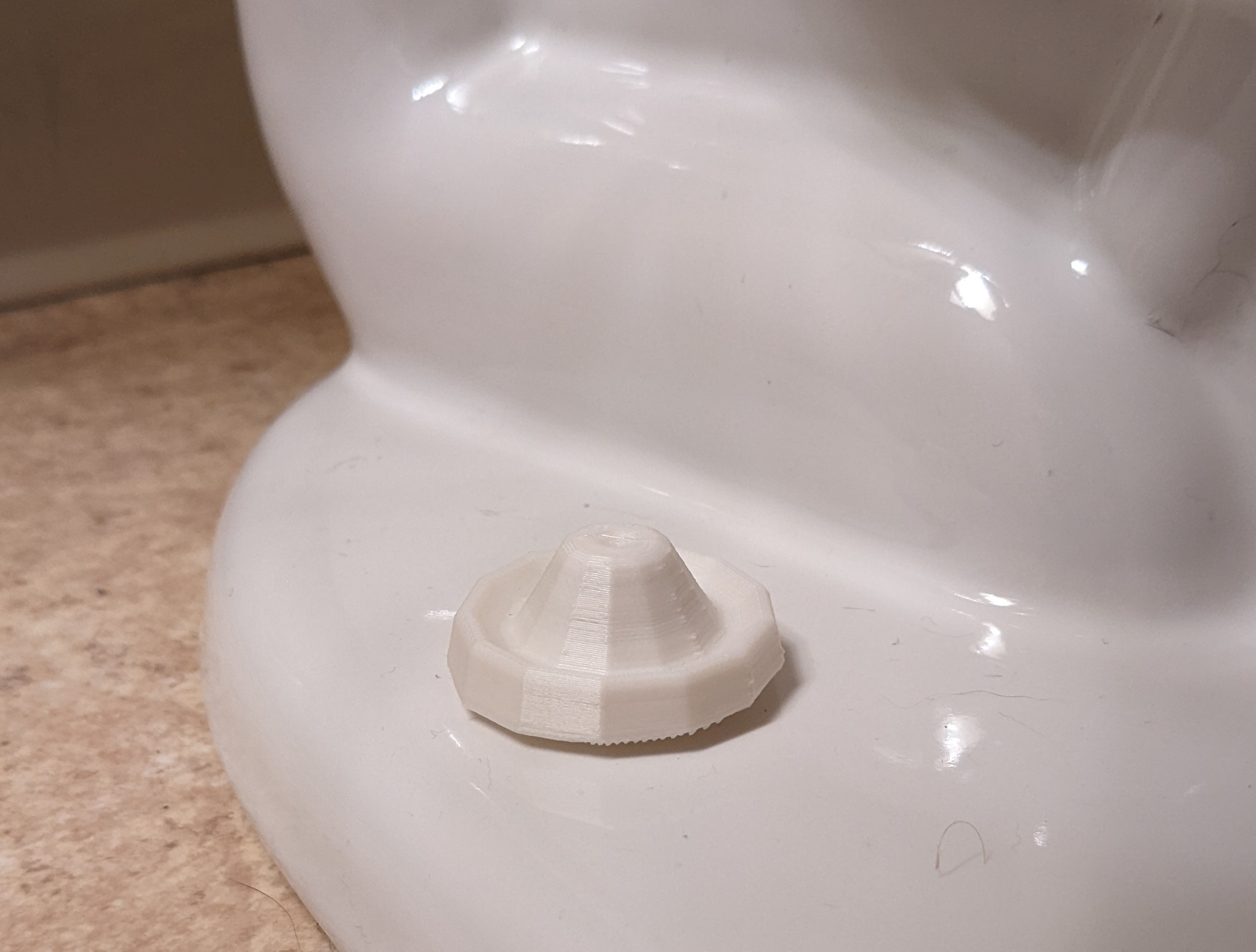 So far I’ve been designing in Shapr 3D on iPad, which has been pretty good and beginner friendly. However, now I’m seeing the great benefits of making parametric designs so will probably switch to Fusion360 when the model calls for it and I’m on a computer.

It’s a great and simple enough way to make things. The things you can make are only limited to the size of the printing area, the filament materials, physics, your imagination, and your CAD skills, in the unlikely scenario where someone hasn’t already designed what you want and graciously uploaded to the Internet for free.

I can definitely see more households getting 3D printers in the future. I’m sure it has gotten loads easier in the past several years, but an easy mode and directory/catalog of parts to print or scanning something to duplicate with your phone would really elevate the accessibility. You can create so many things out of a common resource, being the plastic filament. It would also reduce the amount of shipping that occurs. Say you needed to buy a soap dish, a hair clip, and a tiny thingamajigger for your dishwasher that you can only get from this one store 40 minutes away and they are out of stock and it costs like $50. That sounds kinda lame. You would have to drive to 3 different stores or have them all delivered. I imagine that carbon footprint is pretty large for the comparatively small items you need. A more efficient way to get these items if you already had a 3D printer would be to download some 3D models, that hopefully already exist, and buy a multipurpose spool of plastic and run the printer overnight. The shipping cost then becomes more like a one-time fee for the spool and the prints are probably faster than someone driving it to your doorstep anyway.

This is likely an oversimplification, not including how plastic is made. I haven’t seen that episode yet.

First of all I need to unbox and build the printer. This ended up being much easier than I anticipated. As much of the printer was already pre-assembled as possible and only required me to screw in the base to the top, add the print bed, control unit with screen, and connect all the cables. The cables were pretty well labelled, but I still managed to mix up the print head thermistor with the print bed thermistor

The packaging was also superb and included a 200 g spool of PLA to get started. 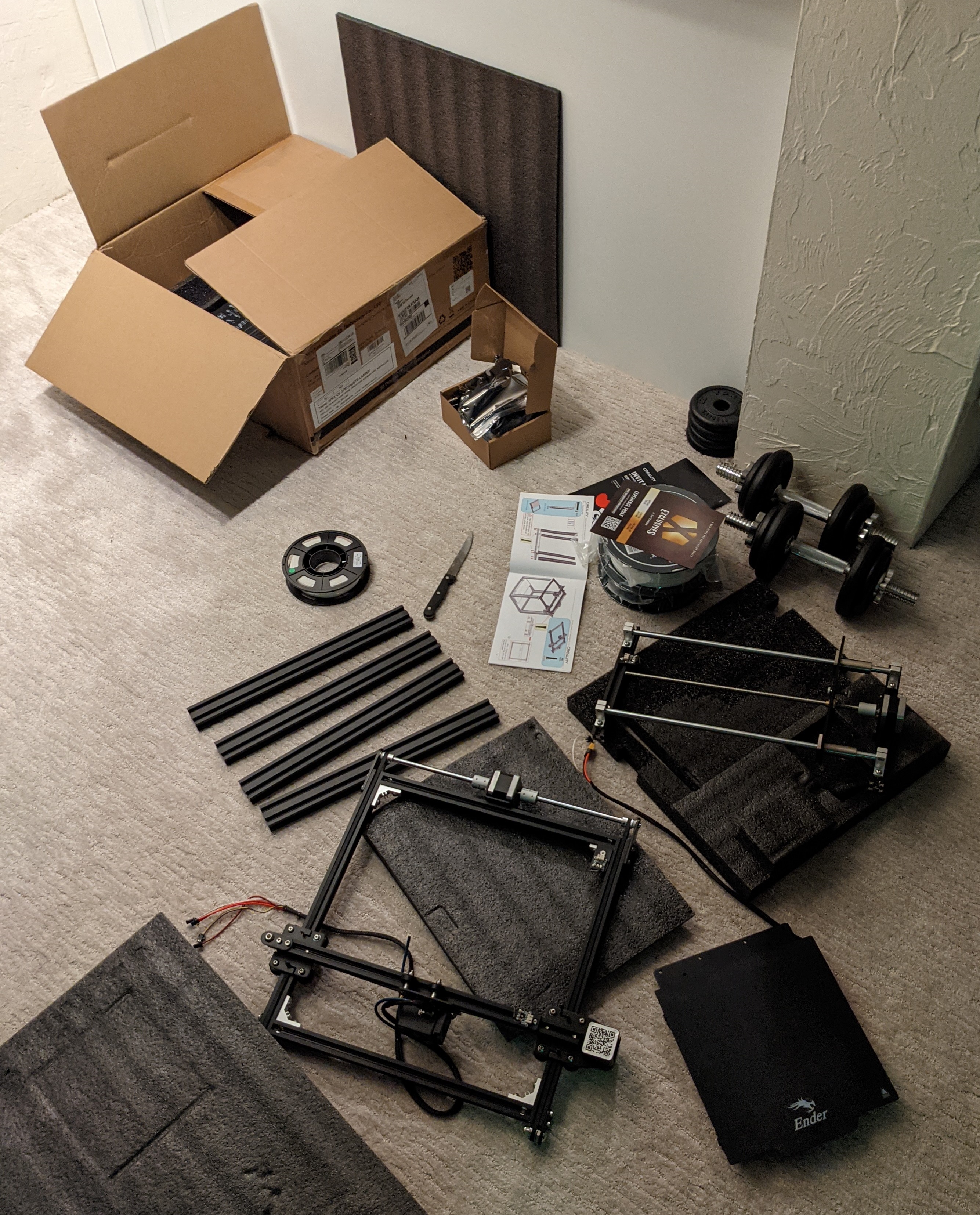 Not including the dumbbells! 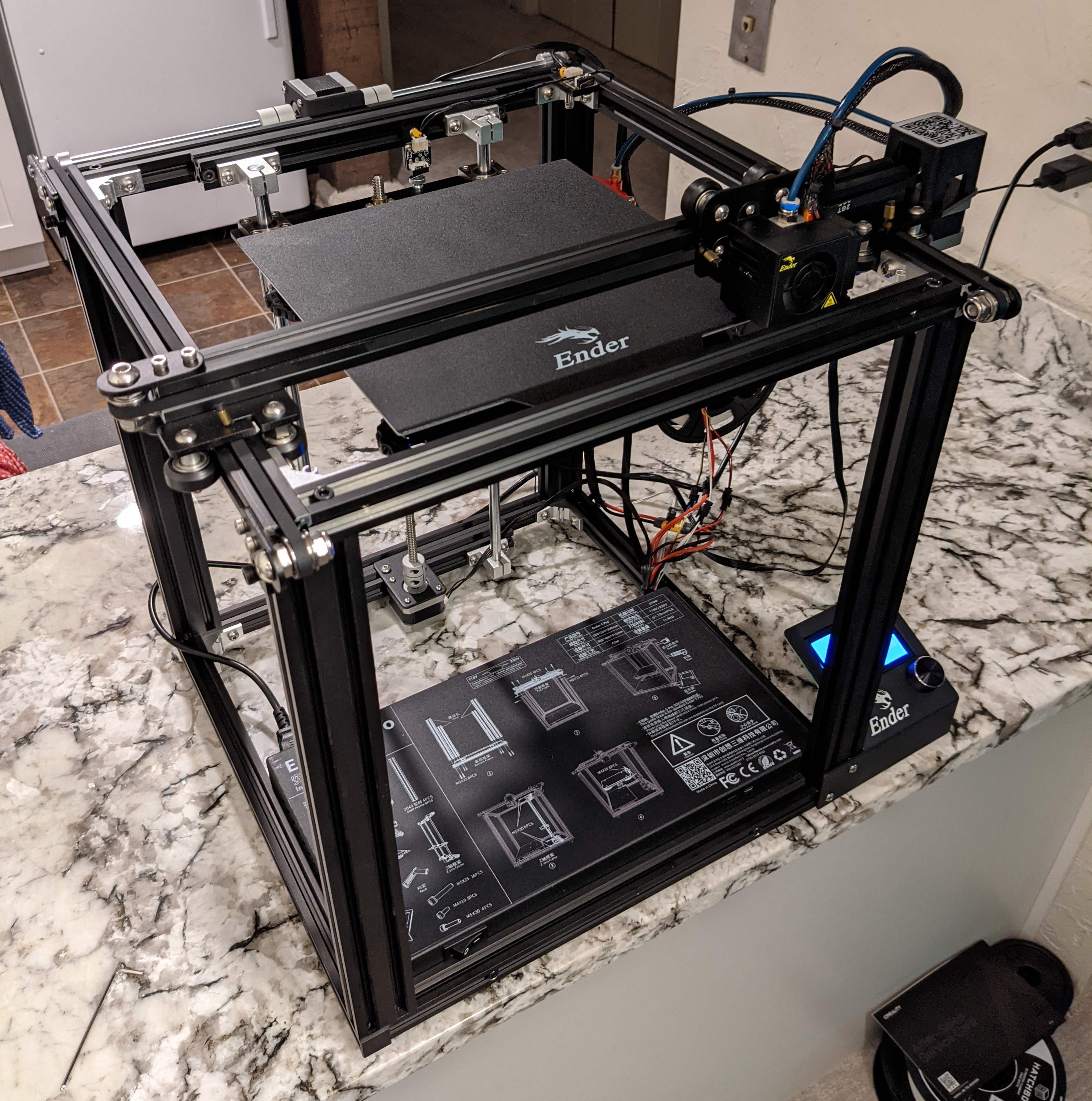 I’m running OctoPrint on my computer with a 10ft Micro-USB cable connecting it to my printer. I throw the printer in my closet whenever I’m not using it to save space.

I also have the printer plugged into a smart outlet, this can allow me to turn off my printer once a print is done. Otherwise, the fans will continue to run - the firmware doesn’t have an option to do this natively :sad:

I will definitely have a mindset of can I build this myself now whenever I have the desire to buy something. Not only would it be more fun to do, it could also be more convenient depending on the circumstances and also self-sufficient. If you want something done right, do it yourself